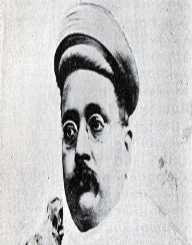 Gopal Krishna Gokhale was a great social and political leader. He is remembered for his participation and pioneer leader of the Indian Independence Movement. This was a movement against the British Empire in India. He devoted all his life and efforts fighting for his countries freedom from the British Empire. His efforts finally came to bear fruits. He managed to convince the Britishers to involve educated Indians in their government. He later led Indian National Congress as its president.  He was the founder of famed Servants of the India Society and was a member of Imperial Legislative Council. He was a great influence on Muhammad Ali Jinnah and Gandhi. The two both belonged to the Indian national movement.

Gopal Krishna Gokhale was born on May 9th, 1866. His place of birth was in Guhagar, Maharashtra. He was from Chitpavan Brahmin family.

Gopal Krishna Gokhale received a good education even though his family had limited resources. He attended Elphinstone College where he graduated in 1884. He was among the first Indians to attend University and a member of Deccan Educational Society. During his studies, he had many exposures, especially in western political thought. It mentored him into the man he later became. Edmund Burke and John Stuart Mill were his most influential theorists. They influenced him in the thought of democracy, liberty as well as the parliamentary system.

Gopal Krishna Gokhale moved to Pune in 1985 post his education. He then co-founded the Fergusson College. He taught history and political economy and later became principal. He then served at the Sarvajanik Sabha before joining the Indian National Congress in 1889. His views on the political world earned him much credit. He believed that non-violent negotiations were the way to get the attention and respect of the Britishers.

He wrote articles for Maharatta, a weekly publication for Tilak. He came to be secretary of Deccan Education Society in 1891. In 1895 he maintained the same position at the Indian National Congress. This was long with Tilak. Later in the same year, he became Senate of Bombay University. In 1889 he joined Poona Municipality and served as president till 1906. He came up with new reforms in the municipality during this time.

In 1899 he was appointed in Bombay Legislative Council where he emphasized on a free India. By then he had become quite famous politically in his country.

1905 was a turning point for Gopal Krishna Gokhale in his political career. This was the time he was appointed at the Indian National Congress to serve as the president. With the help of élan, the two brought many achievements in India. In this same year, he established Servants of India Society. The organization aimed to expand education in India. He wanted his people to learn and get to understand more in their civil duties and patriotic practices. This led to the establishments of many schools even after he died.  In 1912 he traveled to South Africa to meet with Gandhi. Gandhi was to see to it that Indians working at the country worked in a favorable environment. Gokhale wanted to see his people succeed in life.

Gopal Krishna Gokhale was first married to Savitribai in 1880. He was still a teenager then. Later in 1887, he remarried. He had two daughters from his second marriage. His second wife died in 1899 just after the birth of their two daughters. He never married again after that.

Gopal Krishna Gokhale died on 19th February 1915 aged 48 at Bombay.  Many schools were named in his memory. This is to remember the great man who introduced many education reforms in his country while he was alive.