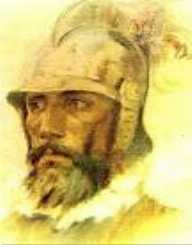 Gonzalo Pizzaro was a Spanish Explorer, Conquistador, Military Leader, and Governor. He is believed by historians to be the leader of the first genuine struggle by colonialists for independence from the occupation of America by the Spanish.

Gonzalo Pizzaro was born in Trujillo, Spain, in 1510. His father, of the same name, was a soldier who had many sons from different women. Gonzalo had Francisco Pizzaro as his eldest brother. There was also Juan and Hernando. There is very little documentation of Gonzalo's childhood.

Gonzalo had the first chance to go on an expedition with half brother, Francisco, who was a very well known conqueror. This particular expedition happened to be Francisco's third and it was intended to conquer Peru. Gonzalo served as Lieutenant to his brother, aiding him in the conquest. He was very much brutal and ruthless. He was also a corrupt conquistador, much like his brothers. Together the brothers conquered Inca, overtaking the capital Cuzco after having defeated and later created the Incan emperor Atahualpa. The city of Inca fell to the Pizarros on the 15th of November 1533. Gonzalo, along with his brother Juan became Inca city's regidores on the 24th of March, 1534.

Francisco headed northwest of Peru and founded the city of Lima, while his brothers Gonzalo, Juan, and Hernando dictated over the city of Cuzco. The brothers were very much brutal and corrupt in their dealings with the natives of Cuzco. Those who defaulted and went against Spanish rule were put to death. This conduct from the brothers would lead to a large scale rebellion from the people. The city of  Cuzco was temporarily recaptured by the Incans, though a fully armed Spanish battalion led by Gonzalo and Juan defeated the rebellion.

The return of Almagro from Chile, after his vain search for gold, saw the capture and imprisonment of Gonzalo and Hernando. Gonzalo Pizzaro managed to escape and met up with Francisco while he planned for a meeting with Almagro. An agreement between Almagro and Francisco led to the release of Hernando. Gonzalo and Hernando went on to regroup and battle against Almagro, defeating him and executing him afterwards for treason.

Francisco appointed Gonzalo as Governor of Quito in 1541. Gonzalo recruited Francisco de Orellana who was a veteran of the war against the Incans and supporter of the Pizzaro brothers as his lieutenant. Together they planned an expedition to a rumored rich kingdom called El Dorado, an unexplored region east of Quito. The expedition comprised of 200 Spaniards, about 4,000 Indians, and numerous horses and other animals. The expedition met tough roads and soon ran out of provisions and supplies. This prompted Gonzalo to send Orellana in a company of 50 men to go and search for food, provision, and supplies.

Gonzalo Pizzaro waited and waited in vain for Orellana's return to no avail. His men were forced to eat their horses and dogs to satisfy hunger. Seeing that the expedition was ill-fated, Gonzalo and the few men who survived the ordeal returned to Quito. Orellana, however, continued the expedition and went on to discover the whole length of the Amazon River. for his return. Just a few Spanish soldiers survived the expedition, as all the Indians died. Gonzalo returned to Quito to more sad news. His brother, Francisco had been killed by Almagro in retaliation for the death of their leader. Pained by this, he offered to help to find the killers but was refused.

In 1544, Emperor Charles V appointed Blasco Nunez Vela as Peru's first Viceroy. There was also the promulgation of new laws which restricted the power of conquistadors and protected the people. The laws prevented the exploitation of the natives by the likes of Gonzalo. Gonzalo was appalled by his diminishing status and gathered an army of loyalists, together with Francisco de Carvajal, to fight against Nunez. This plan worked and Nunez was defeated in the battle that ensued, in the year 1546.

Gonzalo Pizzaro, however, refused the urge to pronounce himself King of Peru and free from shackles of the Spanish kingdom, as strongly advised by Carvajal. Support for Gonzalo greatly reduced when the new representative of the Spanish King, Pedro de la Gasca arrived. He offered pardon and a repeal of the New laws. Gonzalo was fast losing all his men and went on to meekly lose the battle, surrendering to Spanish Royal forces, who beheaded him in the battlefield. He died on the 10th of April 1548, in Cuzcor, Peru.