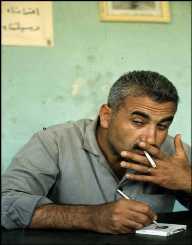 Also Known For : Founder Of The Popular Front For The Liberation Of Palestine

George Habash was born 1926 in Lydda into a family of wealthy grain merchants. Lydda is today known as Lod and is part of Tel Aviv, the capital of Israel.

Studied medicine at the American University of Beirut, graduating as a medical doctor in 1951.

As a young undergraduate, George Habash returned to Palestine in 1948 and worked as a medical orderly and was also witness to the flow of refugees and forced removals from Lydda in 1948. By the early 1950s, Habash had become involved in politics and around this time, Habash and other students formed the Arab National Movement.

After graduating in 1951, Habash lived in Amman, Jordan where he operated a clinic as well as a school for refugees. After some suspicion that he was involved in a planned coup, and threatened with a prison sentence, Habash escaped to Syria. It was in Syria that he became associated with the Pan-Arabist movement of Gamal Nassar (President of Egypt).

Around this time, Yasser Arafat and his organization were preparing for what they termed their liberation war. Habash initially opposed this. He sided with Nassar and felt that conventional war was the way to go. But the Six Day War of 1967 (when Israel defeated Egypt, Jordan, Syria, and Iraq) changed his thinking.

After The Six Day War (1967) Habash established the Popular Front for the Liberation of Palestine (PFLP) in 1968. This organization gained worldwide attention with its policy of hijacking airplanes. In 1968, PFLP hijacked an El Al from between Rome and Tel Aviv. Then in 1970, they seized four fights, three of which were flown to Jordan and blown-up. The result of this was the Black September War between the Palestinian forces and the Jordanian Army. In 1972, the Japanese Red Army working with the PFLP attacked Ben Gurion International Airport, killing twenty-four people. The next hijacking occurred in Africa when the PFLP hijacked an airplane at Entebbe Airport in Uganda.

Habash was head of the PFLP for thirty-two years. He retired in 2000. By the time he retired, the PFLP had been marginalized by groups like Hamas.

George Habash married Hilda in 1961, and they had two children together.

Habash and Yasser Arafat had always had an acrimonious and competitive relationship. Political scientists have speculated that is one reason why Habash founded the PFLP. When Arafat was focused on building support for the Palestinian cause with Arab states, Habash and his PFLP turned to China and Russia. In the early 1990s, Arafat started negotiations with Israel; the PFLP rejected it. Habash was therefore wholly opposed to the Oslo Accords, signed in 1993 by Arafat and Yitzhak Rabin, Prime Minister of Israel. In 1996, the Israeli government permitted Habash to travel to the Palestinian territories for a meeting. He refused to go, saying that to do so would legitimize the Oslo Accords.

Habash was born into a Greek Orthodox family.

Will go down in history as the founder of The Popular Front for the Liberation of Palestine (PFLP).