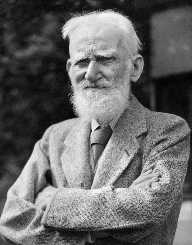 George Bernard Shaw was born on July 26, 1856, in Portobello, Dublin, Republic of Ireland. He was the youngest child in his family and had three older sisters. His father George served in the military and later worked as a corn merchant, but always struggled with alcoholism. He married Elizabeth Gurly, mostly to escape criticism from his aunt. In their later marriage, she began to despise her husband. Around the time when Shaw was born, his mother developed a relationship with a local man George John Lee. Shaw spent his life obsessing that Lee might have been his biological father.

The family lived in quite poor circumstances. Bernard Shaw noted that his mother was not harsh, but he lacked attention from her. Shaw found solace in music, which often filled his childhood home. In 1862, Lee began living with the Shaws and moved to central Dublin. He was shocked about the new living arrangements and started to read avidly from books loaned by his classmates.

Bernard Shaw changed four schools until 1871 when he left school to become a clerk in a Dublin firm. Another personal shock came in 1973, when Lee, Shaw’s mother, and two sisters left for London and never returned.

In 1876, upon learning that his sister is dying of tuberculosis, Bernard Shaw resigned from his job and traveled to England. There he lived together with his mother and Lee in South Kensington and began working as a ghost-writer. In 1878, he made his first attempt at drama when he wrote a blank-verse satirical piece. He did not finish the work and began working on a novel, which he also did not finish.

In 1879 he finished his first novel Immaturity, but it was published only in the 1930s. For the following four years, he continued to write, but his work gained neither recognition nor income. In 1880, he wrote the novel The Irrational Knot, which was followed by Love Among the Artists.

Shaw’s career took a turning point in the mid-1880s when two of his novels- Cashel Byron’s Profession and An Unsocial Socialist were published. However, they were not a commercial success, and Shaw did not return to writing novels again. In 1884, he began working as a book and music critic in several London papers. Two years later, he became the critic for The World. Over the next few years, he mostly became known as a music critic. In 1888 he took the position as music critic for The Star. He continued to work in this field until 1894 and occasionally wrote on the topic.

While working in other jobs, Bernard Shaw continued to write plays. His first published play was The Philanderer, which he wrote in 1882, but only published in 1898. His early box office success was the 1894 play Arms and the Man, a comedic satire on love, military honor, and class. His next play Candida was not as successful and was performed once in 1895. His most prominent success of the time was The Devil’s Discipline, which earned Shaw $ 2000.

By the beginning of 20th century, Bernard Shaw had a firm reputation as a playwright. Starting from 1904, the Royal Court Theatre in Chelsea began to stage his plays, and until 1909, had staged fourteen of them. One of the best-known plays of the time was Man and Superman, which was staged at the Royal Court and in New York. His plays Major Barbara, The Doctor’s Dilemma and Antony and Cleopatra, were all successful. Shaw’s 1911 play Fanny’s First Play had a run of 622 performances.

When the World War I began, Bernard Shaw wrote the Common Sense About the War, which viewed all involved nations to be equally culpable. His view angered a lot of his friends. Shaw was politically active throughout his adult life, and the British authorities recognized his propaganda writing skills.

In 1917, after visiting the Western Front, he wrote a ten-thousand-word report on the human aspects of a soldiers life. During Wartime, his plays The Inca of Perusalem was premiered. The play Augustus Does His Bit opened in January 1917. During this time he also supported Irish Home Rule within the British Empire and thought Ireland should become a part of the British Commonwealth.

After War, his first work- Heartbreak House was performed in 1920 on Broadway. The play was not received well either by critics nor by the audiences. His most significant work was released in 1922- Back to Methuselah. The five plays depicted evolution from Garden of Eden until year 31,920 AD.

In 1920 Pope Benedict XV proclaimed Joan of Arc a saint. Inspired by this event, Bernard Shaw wrote Saint Joan. The play was premiered on Broadway in 1923 and was met with excellent reviews. After this work, Shaw took a five-year-long hiatus from playwriting. In 1928, he published the book The Intelligent Woman’s Guide to Socialism and Capitalism.

Return to the theatre

After Bernard Shaw's hiatus, he came back to playwrighting in 1928 with his play The Apple Cart. The conservative and anti-democratic line appealed to the audiences. Politically, Shaw began to lose belief in an ideal society and attracted to ideas of Lenin and Stalin. Shaw publicly described Hitler as a very remarkable man. In 1931, Shaw’s play Too True to be Good premiered in Boston. He began to travel very often, and in 1932 embarked on a round-the-world cruise.

Bernard Shaw was skeptical towards Hollywood but felt very enthusiastic about cinema. In the mid-1930s, he began to write screenplays for Saint Joan and Pygmalion. The latter won him two Academy Awards, making Shaw the first person to be awarded a Nobel Prize and an Oscar. In the 1930s, Shaw also wrote the plays Cymbeline Refinished, Geneva and In Good King Charles’s Golden Days.

By the end of the 1930s, Bernard Shaw and his wife’s health began to decline. Charlotte was suffering from Paget’s bone disease, and Shaw had pernicious anemia. For treatment, he received injections of the concentrated animal liver. During World War II, Shaw’s previously written plays were revived on the West End stage. In 1941, he wrote the screenplay for Major Barbara, but the film was not commercially successful.

When the war broke out in 1939, Bernard Shaw began to urge the United States to join the fight, since he believed that peace negotiations were impossible. When London was bombed in 1943, both Shaws moved to Whitehall court. Charlotte died in 1943. In 1944, Shaw published his final political work, Everybody’s Political What’s What. He also publicly disapproved of the postwar trials of German leaders.

Bernard Shaw continued to write throughout the 1940s, despite his old age. In 1947 he wrote Buoyant Billions, and in 1948 his final full-length work Farfetched Fables was released. Bernard Shaw died in 1950 from renal failure. He was ninety years old.