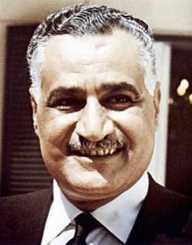 Gamal Abdel Nasser was the second president of Egypt and a revolutionary world leader, who was president between 1956 until his death in 1970. He led overthrowing of the current regime in 1952 and introduced some land reforms. Regarding world leadership, he became the flag bearer of the Arab countries in their coalition against the west.

During his entire life, Gamal Abdel Nasser always had a prominent position in Egypt’s political or military scene. Gamal has been perceived a controversial leader due to some of his decisions regarding the wars with Israel. However, Nasser has also accredited many achievements within his country and the Arab region.

Gamal Abdel Nasser Hussein was born on 15th January 1918 in Alexandria, a place named Bakos. Nasser's  parents were Fahima and Abdel Nasser Hussein. His father Abdel worked as a postal worker. He is believed to have been a native Egyptian man, born in Beni Mur and raised in Alexandria, while his mother roots are traced to Malawi, El Minya. The couple had two other sons named Izz al Arab and Al Leithi. The family is believed to have been staunch supporters of `The Arab notion of glory.’

Due to the nature of his father’s work, the family frequently traveled with him. In 1923, they relocated to Khataba, where Nasser was able to gain some of his early education through a school meant for children of the railway employees. In 1924, Gamal Abdel Nasser was taken to Cairo to live with his uncle, where he joined Nahasin elementary school.

Gamal Abdel Nasser kept in touch with his beloved mother through letters. However, he stopped receiving the messages at one point, and on returning to Egypt, he discovered his mother had died, and they had kept the news from him. This hurt him greatly.
Nasser later moved to Alexandria in 1928 to live with his grandfather, whereby he joined Attarin elementary school. Nasser changed school a bit at this time and ended up at Ras el-tin secondary school. At this time, Nasser became quite involved in some political activities but had no ulterior motive yet to join the political scene. Later at around 1933, Gamal Abdel Nasser and his father moved to Cairo due to his job transfer. Here, Nasser enrolled in Al-Nahda al-Maria school.

Gamal Abdel Nasser's political interests increased considerably at this time, and during the rest of his school years. Gamal Abdel Nasser was the engineer for many demonstrations, i.e., anti-British street demonstrations. Nasser was vocal and extremely outspoken about his views on the Anglo-Egyptian treaty of 1936, and his opinions gained support by Egypt’s political forces.

On completing his education, Gamal Abdel Nasser tried to join the Royal Military Academy, but his police record for the anti-government demonstration blocked his entry. Eventually, he was able to enroll to the Royal military academy and completed his course in 1938 as a second lieutenant. Nasser was posted to a town named Mankabad.

In the army, Gamal Abdel Nasser served both as an officer and a teacher for a couple of years. In 1948, he gained battlefield experience in Palestine during the Arab-Israeli war. The Egyptian forces were able to secure Fauja but were forced to give it up after some negotiations with Israel. After the war, Nasser retained his role as a teacher and instructor. Soon, Nasser came up with a nationalist group that comprised of young military personnel that shared his ideas concerning revolution.

Gamal Abdel Nasser had derived inspiration from the coup d’état that happened in Syria and desired a similar thing in Egypt. Soon, Nasser formed an association named the Association of free officers, with the help of three other officers. 14 members from different politically active organization joined the group. Hence Nasser was able to form a committee and became its chairperson.

The group’s primary objective was to get rid of the British and Egyptian royal family. In 1952, the number of free officers within the organization had increased considerably, to about 90. Gamal Abdel Nasser planned and executed a coup d’état during the same year, which led to gaining independence of the army and getting rid of the monarchy. The reigning monarchist leaders including King Farouk I were exiled.

On June 18, 1953, the Republic of Egypt was officially declared, with Major General Muhammad Naguib as president and Ali Maher as the prime minister. The government came up with a council named revolutionary command council, and Nasser was appointed as its chair. At the time, Nasser had policies and radical reforms that were contrary to Maher’s, who resigned from the position, and was replaced by Naguib.

In the year 1953, Gamal Abdel Nasser relieved Naguib off his duties after facing constant opposition from him and condemned him to house arrest. Nasser then took up the position of Prime minister and Rcc chairman, becoming the sole Egyptian leader. This caused a massive reaction from the Muslim Brotherhood that prompted him to release Naguib. Nasser also arrested thousands of Naguib followers and Brotherhood members.

Nasser came up with a new constitution in 1956. This caused Egypt to become a one-party political state, with socialist Arab system and Islam as the official religion. He gained the support of many Egyptians in the following elections. The economy of the country seemed to improve drastically and came up with significant developments, like the Aswan Dam. Nasser continued to seek independence from the British, hence sought after alliances with the Soviet Union. This angered the British and US who withdrew their support.

1n 1956, the Israeli army invaded Egypt, and the French and British troops bombed various regions. However, intervention from other nations, i.e., US and the Soviet Union caused them to retreat by 1957. After this, Nasser reaffirmed and enhanced his position as the president. Gamal Abdel Nasser then led to many fruitful economic and industrial developments within the country. He was re-elected as president in 1965 for a second term, as he was the only candidate. In 1967, there was an Egyptian-Israeli war that led to the recapture of the Suez Canal. Nasser almost resigned but was forced to remain in office. However, the territory was recaptured in 1970 from the Israeli forces with the help of US-sponsored roger plan.

Nasser got married in 1944 to Tahia Kazim. He had five children.

Gamal Abdel Nasser died on 28th September 1970 and was widely mourned. He was buried at Nasr Mosque.