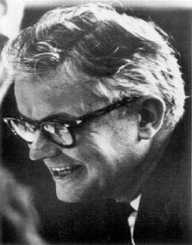 Frank Macfarlane Burnet was widely known as one of the founders of the most profound branch of biology and medicine called immunology. Hailing from Australia, Frank was classified as one of the most valuable scientists in the world. For over six decades, he did nothing else than to prove that human science and human infectious diseases live amongst us. He first commenced with the branch of bacteriology, with an escort of virology and later Immunology. He came to give his best in the study of a variety of immune conditions that is overly caused by viral diseases. His embryonic research paved the way for more profound findings earning him a Nobel Prize for Medicine.

Frank Macfarlane Burnet had a strong belief that he possessed a puzzling attitude in everything he did. He was always in doubts when making his findings as a virologist. But the reality was that he made his first experiments as his priority. He never believed that someone could come and take his well-vast and learned skill.

Behind his mask of creativity and prime initiatives, Frank needed to be loved unconditionally. It was a kind of bragging attitude that made him meet different people around the world. When rejected, he took it as a challenge to fathom further with nothing else than appreciation. He was the being who possessed an independent and razor-edged mind; a unique bravado that was much appreciated wherever he went.

It was on 3rd September 1899 that a couple; Hadassah Burnet and Frank Burnet were blessed with their second born child in Traralgon, Victoria, Australia. The child was none other than Frank Macfarlane Burnet who loved to play with his younger siblings. Before earning his first scholarship in 1913, he enrolled in Terang. Afterward, he joined Geelong College. It was after three years that he received his Bachelors in Surgery and Medicine from the University of Melbourne in 1922.

The following year, he started to investigate and study the process of agglutination; study of blood grouping. It was at the Eliza Hall Institute of Medical Research that he worked on several reactions including typhoid fever. He later went to Royal Melbourne Hospital where he did thorough research on pathology.

Early in 1924, Frank Macfarlane Burnet received his doctorate in medicine. It was the same year that he went to study bacteriology at Lister Institute of Preventive Medicine in London. It was in the same survey that he received his Ph.D. from the University of London.

In the mid of 1928, Frank Macfarlane Burnet got a seat as an assistant director of Eliza Hall Institute. It was there that he continued his research and study of bacteriophages. It was in 1932 that he was pleased to go to London for further investigation. In the process, he conducted several studies on the virus, especially influenza. Before going back to his position at Hall Institute, he took extra time to elaborate and develop cultivation of chick-embryo skin cell with the help of virus culture.

It was in London that Frank Macfarlane Burnet was offered a good rank at a notable Institute which he officially declined. In 1934 he went back to Melbourne where he resumed with his previous research in the field of virology. Early in 1940 Frank wrote and published his first book titled Biological Aspects of Infectious Diseases. The book still educates promising virologist across the world which was later writer in Italian, Spanish and Japanese’s.

In the course of WWII, Frank wanted to prevent the spread of infectious diseases such as influenza. It was in the same process that he started to study the production of its vaccine. In 1944 Frank Burnet was appointed as the Director of Walter and Eliza Hall Institute. He then retired in 1965 where he went to serve as a lecturer at the University of Melbourne. It was here that he wrote several books in regards to his previous findings in virology and human biology.

Throughout his career, Frank got linked with important committees including British Commonwealth Foundation. It was also in 1955 that he served as the chairman of the Australian Radiation Advisory Committee. The same year he wrote several books on virology and immunology. Some of them include Viruses and Man as well as Immunological Surveillance.

From 1947 to 1960s Frank Macfarlane Burnet received several awards and recognitions. Some of them include The Royal Medal, Copley Medal, Albert Lasker Award, and Nobel Prize for Medicine, an Australian Award of the Year in 1960 among others.

In 1928 Frank Macfarlane Burnet married his longtime lover, Edith Linda Marson Druce. His house had a son called Ian and two daughters: Deborah and Elizabeth. After several years of trust and commitment, her loving wife passed on in 1937 due to leukemia. After several years down the line, he married Hazel Jenkin, a biologist.

In 1984 Frank was diagnosed with cancer, and he was treated to the point of recovery. However, his health started to deteriorate again where he was unable to walk or move. Death came to close his eyes on 31st, August 1985. In his honor, he was given a state send-off by the Government of Australia. A Burnet prize was also produced in 1987 by the Walter and Eliza Hall Institute.