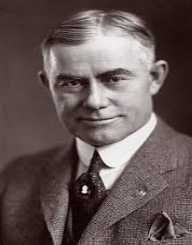 Fielding Yost was an American football player and coach born in 1871 and died in 1946. Also, he was a college administrator.  His coaching career was mainly at the University of Michigan.

Fielding Yost alias Fielding Harris Yost was born on April 30, 1871, in West Virginia, Fairview in the United States. In 1825 is when his family settled in West Virginia. He was the firstborn son of Parmenus Wesley Yost and Elena Jane Yost. Yost had three siblings, two brothers, and a sister.  His father was a farmer, born in 1845 and died in 1920. On the other hand, his mother was born in 1852 and died in 1943.

For his early education, Yost attended local schools in his home town. During his teenage days, he became an assistant marshal in Fairview. He was only seventeen when he attained a certificate in public-school teaching.

Fielding Yost would later be admitted to Fairmont Normal School in West Virginia where he took his college education. While studying, he continued his teaching career at Patterson Creek, West Virginia.

Thereafter, Yost studied law at West Virginia University from 1895. After his studies, he earned an LL.B. Besides studying, Yost also played for the football team of the university.

Thereafter, for several years, Yost was the football coach at the University of Michigan.  From 1901 to 1905, his team “point-a-minute” was believed to have scored 49.5 points on average in each game. This made him quite famous.

The athletic director of Career

In 1906,  Fielding Yost tied the knot and had a son. He was a devout Christian. Nevertheless, this did not prevent him from allowing Jewish players to play with his team.

For several years, Yost’s health deteriorated significantly. He was hospitalized several including in May 1946 when he suffered a stroke. Thankfully, he improved and was released from Battle Creek Sanitarium after 2 weeks. Again on 20 August 1946, 75 years old Fielding Yost had a gall bladder attack while resting at home. Sadly, he died.