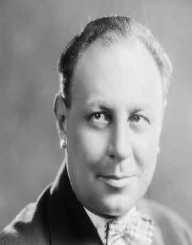 Emil Jannings was a German actor and the first recipient of the Academy Award for Best Actor.

Theodor Friedrich Emil Janenz was born in Rorschach, Switzerland, on July 23, 1884. His father, Emil, was a businessman. His mother’s name was Margarethe. His family soon moved to the city of Leipzig, and later to the town of Gorlitz.

Starting in 1901, Emil Jannings was part of different stage groups in several German cities. In 1906, he finally joined the German Theatre in Berlin. He worked with the prominent director Max Reinhardt. His first success was his role as a judge in the comedy play Broken Jug. He started to appear in films in 1914. His first big part was in Madame DuBarry, where he played King Louis XV. He soon signed with the UFA production company. He starred in several films, such as The Eyes of the Mummy and The Last Laugh.

Emil Jannings' popularity grew. He managed to sign with Paramount Pictures. He began his Hollywood career in two films – The Way of All Flesh and The Last Command. They brought him the Academy Award for Best Actor in 1929. This was the first year the ceremony was ever held. Still, his American career did not last long. Sound films appeared, and directors did not like his heavy German accent. He managed to appear in just a few more Hollywood films.

Emil Jannings returned to Germany. There, the Nazi regime was rising to power. He publicly showed his support for the Nazi Party. He starred in different propaganda films, such as The Old and the Young King, The Ruler, and others. Joseph Goebbels, the Minister of Propaganda, gave him the title of “Artist of the State.”

Emil Jannings career came to an end when World War II ended. Other countries did not want to hire him because of his support for the Nazis. He retired to Austria.

Emil Jannings' first marriage ended in divorce. His second wife was the actress Hanna Ralph, and his third wife was Lucie Hoflich. In 1923, he married the actress, Gussy Holl. He stayed with her until the rest of his life.

Emil Jannings suffered from liver cancer. He died on January 2, 1950, in the village of Strobl, Austria. He was buried at the cemetery in the town of Saint Wolfgang.

In 1960, he got his star at the Hollywood Walk of Fame. His Oscar now stands at the Museum of Film and Television in Berlin.