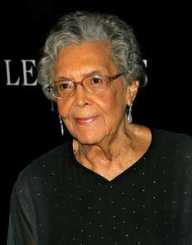 Elizabeth Catlett was an African-American sculptor and graphic artist. Born on April 15, 1915, most of her works portrayed struggles of African-American in the 20th with emphasis on women. Catlett works encompassed abstract and figurative fused in Modernism. Catlett initially worked as a teacher since it was difficult to penetrate the art industry as a black woman. Upon receiving a fellowship in 1946, she moved to Mexico. While there, she worked with the Taller de Gráfica Popular. She subsequently served at Escuela Nacional de Artes Plástica as head of the head of the sculptor department. Despite starting with prints, Catlett later focused on sculpting. Her works sought to send social messages.

Elizabeth Catlett was born on April 15, 1915, in Washington D.C. where she also grew. Both parents were children of freed slaves. Her father lectured at Tuskegee University, and her mother was a truant officer. She did not see her father as he died before her birth. As a result of her father’s death, her mother picked several jobs to earn enough to cater for the family. Growing up Catlett’s grandmother told her stories about the captivities of Africans into slavery and their struggles. Catlett gained interest in arts as a child.

Despite her interest in arts, she had to go into teaching because breaking through the art career as a black woman was difficult. Therefore, following her graduation, she moved to Durham, NC, where she taught in high school. Catlett subsequently enrolled for a graduate program at the University of Iowa. The decision came after gaining interest in the artist Grant Wood. While there, she studied sculpture under Harry Edward Stinson and drawing and painting with Grant Wood. On the advice of Wood, she started carving images of African-American women and children. In 1940, Catlett became one of the first three students of the university to earn masters in fine arts. In addition, she was the first black woman to achieve that feat. The Elizabeth Catlett Residence Hall on the University of Iowa campus is in her honor.

Following his graduation, Catlett left for New Orleans where he worked at Dillard University. She also studied ceramics at the Art Institute of Chicago during summers. At the South Side Community Art Centre, Catlett studied lithography. Moving to New York in 1942, she taught at the George Washington Carver School in Harlem. During this period, she also studied lithography at the Art Students League of New York.

Elizabeth Catlett married artist Charles Wilbert White in 1941. The couple, however, ended their marriage in 1946, while in Mexico. Catlett later married printmaker and muralist Francisco Mora in 1947. They had three children, Juan Mora Catlett, Francisco, and David. She died on April 2, 20012, at her studio in Cuernavaca. She was 96 years.

Catlett earned a Rosenwald Fund Fellowship for further studies in Mexico in 1946. She, therefore, moved with her husband to Mexico that same year. After a year in Mexico, she joined the Taller de Grafica Popular. The workshop promoted prints of leftist social ideology and education. She later studied at Escuela Nacional de Pintura, Escultura y Grabado "La Esmeralda." She also taught and later headed the sculpture department at the Escuela Nacional de Artes Plásticas.

The U.S. Embassy in Mexico started monitoring Catlett due to her involvement with Taller. This was because some members of the group belong to the Communist Party. She had also been arrested in 1949 in Mexico for his involvement in railroad strike. As a result, the United States bared her from entering the country. Catlett also renounced her American citizenship in 1962 becoming a Mexican citizen. However, in 2002, she regained American citizenship.

Catlett artistic career encompassed print and sculpting. She used woodcuts and linocuts for her print works. For her sculpture works, she used varied materials including marble, clay, mahogany, cedar, bronze, limestone, eucalyptus, and onyx. Her main themes included historical figures, social injustice, the relationship between mother and child, and human condition. These themes primarily related to the African-American experience in the 20th century.

Catlett received numerous awards and honor throughout her life. In 1956, she received induction into the Salón de la Plástica Mexicana. She won the First Prize at the American Negro Exposition in Chicago in 1940. She has an honorary doctorate from Carnegie Mellon and Pace University.