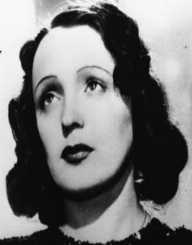 Edith Giovanna Gassion was born on December 19, 1915, in Paris, France. Her parents were Annetta Giovanna Maillard and Louis-Alphonse Gassion. She later went by the name Edith Piaf, which is the name she is now best known for. For much of her childhood, Piaf was raised by her paternal grandmother, as her mother had left her and her father was at war. After the 1920’s, her father raised her, and the two traveled around France together, as he was a traveling street performer who specializes in acrobatics.

Edith Piaf’s music career began in 1935. She had a small start, singing in nightclubs in France. The owner of one of the nightclubs she worked at, Louis Leplee, also taught her various stage techniques and gave her the nickname La Mome Piaf, which stuck, however, it wasn’t until later that her stage name became Edith Piaf. It was in that same year that Piaf recorded her first two albums.

In 1936, her career took a devastating turn, as she was accused of murdering Leplee. She was arrested for this crime but was acquitted. However, all of the bad publicity ruined her career. It wasn’t until Raymond Asso, a new manager of sorts, helped to revamp her image to make her look good to the public again.

In the 1940’s, Edith Piaf turned her attention to working in theater. In 1940, she starred in the play Le Bel Indifferent. This experience with theater encouraged Piaf to write lyrics for musicals in following years.

Throughout her career, Edith Piaf also toured all around the world. She was most popular in France, where she was from. She was also highly popular in the rest of Europe and the United States. She toured in Europe, North America, and South America during her career.

Edith Piaf recorded many popular songs as her time as a musician. Her last song, L’Homme de Berlin, was recorded in 1963. Some of her other famous songs are listed below.

Edith Piaf began her acting career in 1936 with her onscreen debut in The Tomboy. Over the course of her acting career, she performed in both English-speaking and French-speaking films. For the most part, she only held small acting roles. In many of her films, she played herself. Some of her other films are listed below.

Edith Piaf is a member of the Grammy Hall of Fame.

Edith Piaf had one child out of wedlock with Louis Dupont in 1932. They named their daughter Marcelle. Sadly, Marcelle died two years later. However, the couple never married. Edith Piaf married Jacques Pills in 1952. However, the couple divorced in 1956. She later remarried to The Sarapo in 1962. The couple remained married until Piaf’s death.

Between 1950 and the years preceding her death, Edith Piaf was in three near-fatal accidents. With a major injury after the first of her accidents, Piaf became addicted to morphine. Around the same time, she became an alcoholic. It was not long before she developed liver cancer. Edith Piaf died on October 11, 1963, in Plascassier, France. The cause of her death was liver cancer. She was only 47 years old when she passed away.

The Musee Edith Piaf was named after her. It is a museum about the singer’s life and work. Many objects from her life are included in the museum, as well as a cutout of her.

David Bret wrote her biography, called Piaf: A Passionate Life. Another book No Regrets: The Life of Edith Piaf was written by Carolyn Burke.

There have been several docudramas made about her life. These films are listed below.