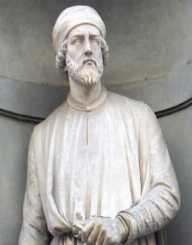 Donatello is one of the magnificent artists born in the year 1386 in Florence, Italy. He was then given the Name Donato di Niccolo di Betto Bardi. He was one of the early art prodigies that made his name before he could hit his twenties. Therefore, he had the opportunity to get commissions for his work at a very young age in the art world. He had his major in the art of classical sculpture. Thereby, he used his talent to form the Renaissance style that later became famous among other artists. Some believe that his work was only second to another renowned sculptor by the name Michelangelo’s.

Donatello was born in the year 1386 to one Niccolò di Betto Bardi. He got his education from the keen eye of the house of Martelli family. However, some say that Donatello realized his artistic nature while working in one of the goldsmith's shops. By then he was under the apprenticeship of Lorenzo Ghiberti. The year 1404 through to 1407 saw to Donatello seeking treasures in Rome.

Therefore, to sustain himself he got work as a sculptor in goldsmith’s shops. He was by then with his friend Filippo Brunelleschi. Through their movement in Rome, they both got to learn a lot. Therefore, they managed to attain the best level of artistic knowledge. Some believe that this period is when he got to shape his gothic style and art.

The year 1408, saw Donatello back in Florence where he took up work at the Cathedral. During this period he managed to sculpture his first statue of David. He had used the gothic style to finish his brilliant job. Later, he took up another commission to work on the sculpture of Saint John the Evangelist. This was between the year of 1409 to 1411. This was a deciding moment in Donatello’s life.

In the year 1411 to 1413, he took up another commission on the St. Mark. The statue was under the commission the Church of Orsanmichele. So, as time went by, Donatello’s work was also improving and gaining fame among many. Therefore, he also got more commission with a tremendous amount of money. One of his original masterpieces was the sculpture of the St. John the Evangelist.

Donatello was using his unique style to bring sculptures to life. The statues that he was working on were large and lifelike thereby making his style unique. Somehow, he managed to draw his inspiration from reality. Consequently, his method worked for him. By then, most of the artists were using some flat background to place the figures. However, Donatello went the opposite way and managed to fix that.

According to critics, Donatello drew his inspiration majorly from emotions that he could express on the figures faces. Upon acquiring such great fame and popularity, he partnered up with Michelozzo. Michelozzo was also one of the former apprentices of the famous Lorenzo Ghiberti. Therefore, they made their move to the Italian capital Rome.

In Rome, they did work on several projects including the tomb of Antipope John XXII. Also, they did the job on the grave of Cardinal Brancacci.  Their innovative skills on the tombs brought them more fame. Therefore, it helped them get more commissions in Florence.

In his life as an artist, Donatello did his most famous work for Cosimo de Medici in Florence. Cosimo was one of the Florentines with a passion for the arts. So, he gave Donatello work. Therefore, Donatello produced his masterpiece David in bronze. The statue of David was to be alone and support itself. Some art critics say that David gives the representation of allegory civic triumph over irrationality and brutality. After achieving such great lengths in the art world, Donatello got a commission from the Padua family.

He took up the commission to produce Gattamelata. The statue was made of bronze like David. Moreover, on it was the sculpture of the late Erasmo da Narni riding a horse. At the time such depiction was left for only kings and rulers. Therefore, the sculpture stirred up a lot of controversies. However, despite the whispers, the statue became the reference point for most of later equestrian monuments.

The year 1455, saw to Donatello back in Florence permanently. There he took up a commission to finish the statue of Mary Magdalene. The figure was for the convent of Santa Maria di Castello. Some say that the sculpture was there to give comfort to the nuns that had repented from prostitution. He later worked on other projects for rich people who loved his work.

During his last years, Donatello got a significant retirement benefit from the Medici’s. However, he passed on of unknown causes on the December 13th of 1466. His burial place is at Basilica of San Lorenzo beside Cosimo de Medici. His apprentice Bertoldo di Giovanni did some of his uncompleted works.