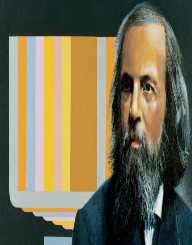 Dmitri Mendeleev was born on the 8 February 1834 in Tobolsk, Siberia, Russia.

Dmitri Mendeleev was born into a large family of fourteen children. His mother was Mariya Dmitriyevna Kornilova and his father, Ivan Pavlovich Mendeleev. His father was a teacher of philosophy, who went blind, which caused the family hardship. When this happened, Mariya reopened a disused glass factory her family owned. She worked there until it burnt down in 1848.

Dmitri Mendeleev graduated from the Main Pedagogical Institute in St Petersburg in 1855. He taught for a short time before returning to do his Masters. Mendeleev did some of his research at the University of Heidelberg in Germany. Later, he obtained his doctorate (1865).

After graduating, Dmitri Mendeleev taught in the Crimea and also in Odessa when he was in ill health. He returned to his studies when well again. After obtaining his master’s degree in 1856, he started researching organic chemistry, and this was where he was to find fame. Mendeleev did some of his research at the University of Heidelberg working with some of the leading German chemists of the day. In 1860, he went to the International Chemistry Congress in Karlsruhe. At the conference, he had the opportunity to meet some of the most beautiful minds working in chemistry in Europe at the time. Mendeleev would later cite a paper by an Italian chemist Stanislao Cannizzaro as being especially enlightening regarding atomic weights.

Mendeleev was offered a professorship at the Technical Institute of St Petersburg, and he joined the university in 1864. He obtained his doctorate in 1865 and was then made Professor of Chemical Technology at the St Petersburg State University. His next appointment was Professor of General Chemistry which he held between 1867 and 1890.

Dmitri Mendeleev is remembered as the chemist who developed the Periodic Table of Elements. His periodic table of 1871, had gaps: he was aware that there were elements that were yet to be found and researched. When this was proved to be correct during his lifetime, it made him famous around the world. These elements were: gallium (1875), scandium (1879) and germanium (1886).

In 1861 he published a textbook on organic chemistry. Mendeleev wrote a follow-up book, The Principles of Chemistry. This book became a standard textbook and was used around the world.

His law was presented to the Russian Chemical Society in 1969. Chemists were initially lukewarm in their response, but after the discovery of his three predicted elements that changed. Mendeleev’s Periodic Law was accepted.

Mendeleev was one of the first scientists to have collected data from others and collated it. He spends a significant amount of time and energy amassing data from other scientists and formulating his Periodic Table of Elements. This itself as considered groundbreaking.

Dmitri Mendeleev won the Nobel Prize in Chemistry in 1906 for his discovery of the periodic system. He also won the Davy Medal, the Copley Medal (1882) and ForMeRS (1882). Element 101, Mendelevium, is named after him. The Dmitry Mendeleev University of Chemical Technology of Russia was called In his honor. In 1861 Mendeleev published a textbook on organic chemistry which won the Demidov Prize.

The Russian Academy of Sciences has an annual science medal, the Mendeleev Gold Medal.

Dmitri Mendeleev left his position at the university in 1890. He was subsequently appointed the Director of the Russian Bureau of Weights and Measures.

When Mendeleev died in 1907, his theory was part of modern chemistry and accepted worldwide.