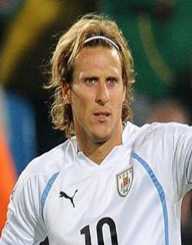 Diego Forlán is a professional footballer regarded as one of the greatest all times best Uruguayan players. He is best remembered for his outstanding performance in the 2010 World Cup final.

He was awarded the Golden Ball Award as the player of the tournament in the 2010 FIFA World Cup. Forlán also set a record as the most capped player.

Diego Forlán was born in Montevideo, Uruguay on 19th May 1979. He was raised from a family of footballers, his father also playing for the national team and his grandfather a professional footballer in the Uruguayan.

During his early years, Forlán played soccer and tennis. He chose soccer since it had a promising future. He was signed by Club Atlético Peñaro youth team before moving to Club Atlético Independiente.

During the 1998-1999 season, Diego Forlán made his debut for Club Independiente. He also played for Uruguayan junior team during the 1999 FIFA World Cup.

His talent and football flair got the attention of the European Football giants. Manchester United FC succeeded signing on January 22nd, 2002.

Diego Forlán managed to make 13 appearances in the 2001- 2002 season for Manchester United but was not able to score. He scored his first Manchester United goal in the coming season after coming on for Ryan Giggs in the 89th minute.

Despite the high expectation of his career in the English Premier League, his two and half years at Manchester United were disappointing.

His last game in the EPL was against a loss against Chelsea on 15th August 2004.  Forlán's most memorable moment under Sir Alex Ferguson was when he scored two goals against the Red Devils bitter rivals Liverpool FC.

Diego Forlán's move to the Spanish league revitalized Forlán's career. He signed for Villarreal Fc in 2004 and made his debut on August 30th, 2004 against Valencia scoring his first goal for the club despite losing the game.

His first season saw him win Pichichi Trophy for finishing as the league top scorer with a record club record of 25 goals in one season. During that season he was also the joined top scorer of European Champion League with Thierry Henry.

During the 2005-2006 campaign, Villarreal made too many changes to its club affecting Forlán's goal scoring record. He managed to help his club reach the semifinals for the first time but lost to Arsenal FC.

Diego Forlán went on to score 19 goals in 36 appearances in that season before signing for Club Atlético de Madrid. He went on to win his second Golden Shoe Award during the 2009-2010 season.

After the departure of Samuel Eto'o, Inter Milan signed Diego Forlán to fill his shoes. After making 22 appearances for the club and scoring two goals, he left the club.

He went on to sign for Vasco da Gama in Brazil, helping the club win Campeonato Gaucho cup scoring nine goals in the tournament.

His professional club career ended in India where he played for Mumbai city and Kitchee between 2016 and 2018.

Diego Forlán is the 2nd most capped player for his country with 112 caps to name. His international goal scoring record of 32 goals has not been matched by any player.

He helped his country to the semifinals of the FIFA 2010 World Cup Finals in South Africa. They finished 3rd in the tournament, Forlán winning the player of the Tournament trophy.

During a press conference on 11th March 2015, he made public his retirement from International football.

Diego Forlán was engaged to Zaira Nara a model and actress. The two, however, were never married. He later married Paz Cardoso. They have one son together, Marten.