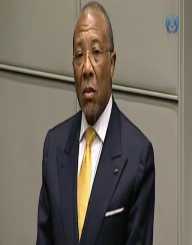 Charles Taylor was a politician in Liberia and became their 22nd president, whose reign lasted from 1997 to 2003.

Right after college graduation, Charles Taylor dived into politics by being part of an organized revolt, against president Tolbert. Charles's career political has been quite rough since he found himself on the wrong side of the law a couple of times.

Charles Taylor was first arrested on theft charges but escaped from prison to a neighboring country Libya. While there, he was helped and trained by famous dictator Gaddafi.

As a result, Charles Taylor was able to overthrow Samuel Doe from power. However, he was later charged with various humanitarian crimes and was subsequently arrested. Charles is currently serving a jail term in the Netherlands.

Charles Mc Arthur Ghankay Taylor was born on 28th January 1948, in Arlington, near Monrovia, Liberia. His parents are Nelson Taylor and Bernice Taylor. His mother Bernice originated from of an ethnic group called Gola, which forms part of 95% of native Liberians. Nelson Taylor worked as a lawyer, judge, sharecropper, and teacher, and is believed to have been of an Americo-Liberian origin. This referred to the African-Americans who had colonized Liberia.

Charles Taylor later took up the name `Ghankay.’ His main reason behind the decision was to Gain favor with the native Liberians. Charles went to college at Bentley College located in Massachusetts. Charles later graduated with a degree.

Charles Taylor began his career by working for Samuel Doe after his graduation. On 12th April 1980, they organized an uprising against President William R Tolbert. They were successful and killed and overthrew the president, then established a new military rule under Doe’s party named `People’s redemption council.’ Taylor was appointed as the Director General of `General services agency.’

The organization’s dealt with procurements for the government. Charles Taylor, however, lost his position in 1983 when he was found guilty of embezzling $1 million from the government for personal interests. Charles then sought refuge in the United States but was still arrested while there. He was convicted and sent to `Plymouth County House of corrections’ located in Massachusetts.

However, Charles Taylor soon escaped with the help of a few other inmates, on 15th September 1985. It is believed that they got through a window after cutting through a bar, and then slid down using sheets and disappearing into the neighboring woods. Although some reports claim some of his relatives helped him. Taylor confessed that CIA operatives assisted him.Taylor then went to Libya, under the refuge of the revolutionary Mumar Gaddafi. While there, Gaddafi helped train him in guerrilla warfare.

Charles Taylor then moved to Ivory Coast where he founded the `National Patriotic Front of Liberia.’ This was a group comprising of mutineers. From Ivory Coast, he headed back to Libya and started the `First Liberian Civil war.’ The war began in 1989, with the objective of Ousting President Samuel Doe. Under his leadership, the NPFL took charge of most parts of the country within a year. During the same year, Taylor parted ways with Price Johnson, who was one of his senior officers.

Johnson then started the `Independent National Patriotic Front of Liberia.’ He then attacked and gained control of Monrovia city, took Samuel Doe as captive, and tortured him to death. This led to an intensified civil war in Liberia and ethnic divisions. The battle lasted for about seven years up to 1996.

General elections were then organized and held in 1997, courtesy of `United Nations Observer Missions in Liberia’ and `Economic community of West African states.’ Charles Taylor contested the elections as the presidential candidate for the NPFL. The elections are believed to have been free and fair, and Taylor emerged Victor, amidst fear of him by many citizens. In the next two years, many citizens began to rail against his leadership. As a result, `Liberians United for reconciliation and democracy’ (LURD) was formed in 1999. The group began openly discriminating and protesting against Taylor’s Government.

Due to this, the `Second Liberian civil war’ began, with LURD’s influence growing by the day. The government of Guinea helped the group, and before long, they had captured most Parts of Liberia. In 2003, another rebel group called `Movement for democracy in Liberia’ (MODEL) was formed. With the help of the Ivory Coast government, it soon gained control of Southern Liberia.

During the same year,  Taylor was accused by the Special Court of Sierra Leone in the participation of the `Sierra Leone civil war,’ among other war crimes. More, the court charged Taylor of offering refuge to Al-Qaeda terrorists who were believed to be responsible for embassy bombings in Tanzania and Kenya.

2003 was an extremely tough year for Charles Taylor The worst happened when the opposing militants took control of Monrovia, and he was forced to seek exile in Nigeria. The US president George W Bush then urged him to resign, and he thus left office on 11th August the same year. His vice- president Blah then took charge of the government, and Taylor fled to Calabar, Nigeria.

In November, the United States placed a $2 million bounty on any help leading to Taylor's arrest. However, he was able to survive for three years and in 2006, the newly elected president Ellen Johnson requested the Nigerian government to assist in Taylor's arrest. The request was soon approved but was not successful as Taylor went missing.

However, Charles Taylor was arrested the same year at Cameroon’s border in an attempted escapeTaylor was then taken to Libya and later Sierra Leone for a trial where Taylor was found guilty of about eleven charges and was convicted to a prison in the Netherlands, where he is being held currently.

Charles Taylor got married to Enid Tupee Taylor. Later in 1997, he married a lady named Jewel Cianeh Howard, and their marriage lasted for nine years, after which they got divorced. Jewel is currently serving as a senior Senator in Liberia. Taylor has fifteen children from these two marriages and other girlfriends.

Two of Charles Taylor's sons have also been arrested on various occasions. His son’s Phillip Taylor assaulted the son of an immigration officer, in a bid to revenge his father’s extradition. He was arrested and charged with an attempted son. Taylor also had another son with a college girlfriend named Charles Macarthur Emmanuel. Emmanuel was a United States citizen and was arrested in conjunction with a rule that prohibited any United States citizen from participating in torture abroad. He was sentenced to 97 years in prison.