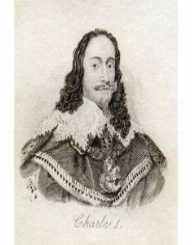 Charles I of England

Charles I of England introduced several unpopular policies, including the levying of taxes without the knowledge of Parliament, hence, was opposed by the subjects and seen as autocratic. His religious policies and marriage to a Roman Catholicwas met with strong opposition from the English Puritans and Scottish Covenanters.

In 1647, Charles I of England escaped but re-arrested and held at the Isle of Wight, and that was where he made an alliance with Scotland. This rather came very late as the New Model Army of Oliver Cromwell had taken control over England. In January 1649, Charles I of England was executed for high treason. After his death, the monarchy was abolished, and a republican rule, known as Commonwealth of England introduced.  However, the monarchy was restored in 1660 for Charles’s son, Charles’s II.

Charles I of England joined his family in England in mid-July 1604 and was put under the care of Elizabeth, Lady Carey, the wife of Courtier Sir Robert Carey. Lady Carey put him in boots made of Spanish leather and brass to help strengthen his weak ankles. As time went on, his speaking ability also improved but had to retain stammering for the rest of his life. As custom demand for second sons in England, Charles I of England was created Duke of York and bestowed Knight of Bath in January 1605. He was also made Knight of the Garter in 1611.

As heir apparent, his father King James VI arranged a marriage between Charles I of England and Habsburg princess, Maria Anna of Spain in order to ensure peace between the two countries and Europe as a whole. This move was however blocked by the England Parliament, and as a result, James VI angrily dissolved the parliament.

In February 1623, Charles I of England and the Duck of Buckingham secretly traveled to Spain for negotiations on the marriage. However, this failed as the Spanish demanded Charles I of England convert to Catholicism, called for the toleration of Catholic in England and the repeal of the penal laws. The negotiations failed, and they returned to London in October that year. King James VI died in March 1625 and was succeeded by Prince Charles as Charles I.

After ascending to the throne, Charles I of England I, intentionally delayed the opening of his first Parliament until his marriage to French princess, Henrietta Maria to avoid any opposition. There were concerns that since Henrietta was a Catholic, the King would be flexible on Catholicism and undermine the Reformed Church of England. Despite promising the England Parliament that he would not relax the religious restrictions, Charles I of England secretly agreed otherwise with his brother-in-law, Louis XIII of France in a secret marriage treaty.

Charles I of England was officially crowned on February 1626, at Westminster Abbey but without his wife as she refused to partake in a Protestant religious ceremony. The Puritans and Parliament began to be suspicious of Charles I of England’s religious policies after supporting and later appointing anti-Calvinist clergyman, Richard Montagu as one of his royal chaplains. Parliament called for the dismissal of his friend, Duke of Buckingham but he refused, and the call even increased after Buckingham failed to protect the Huguenots at La Rochelle leading to the siege of La Rochelle by Louis XIII.

The disagreement between the Parliament and Charles I of England heightened when he introduced the “forced loan” a tax without parliamentary consent. Buckingham was assassinated on August 23, 1628; a news met with jubilation among the crowd but grievous to Charles. Charles I of England continued to have several issues with the England parliament calling for an impeachment process against him in 1640 during the long parliament.

In 1642, the relationship between Charles I of England and Parliament deteriorated resulting in the English Civil. Parliament called for volunteers in its army and at the start of the war controlled London. Charles I of England was eventually defeated and surrendered to the Scottish Presbyterian army. He was handed to the English Parliament in January 1647, after nine months of negotiations in exchange for £100,000.

Charles, I of England was held under house arrest at Holdenby House in Northamptonshire until June 3, 1647, when Connet George Joyce forcedly took him in the name of the New Model Army. Several fruitless negotiations were held between Charles and his captors.

In November 1647, Charles I of England escaped from his prison in Hampton, and while at the shores of the Southampton Water contacted Colonel Hammond, Parliamentary Governor of the Isle of Wight, whom he felt was sympathetic. However, Hammond held him at the Carisbrooke Castle and informed the Parliament. On December 26, 1647, Charles I of England secretly signed an agreement known as the Engagement with the Scots, which was to allow the Scots invade England on his behalf and restore him to the throne. This resulted in the rise of the royalist in May 1648 and the start of the Second Civil War. The royalist army was, however, defeated and further negotiations failed. Charles was indicted and charged with treason by the Rump House of Commons in January 1649, which was rejected by the House of Lords as unlawful.

The House of Commons however continued with the trial of high treason on charges that "for accomplishment of such his designs, and for the protecting of himself and his adherents in his and their wicked practices, to the same ends hath traitorously and maliciously levied war against the present Parliament, and the people therein represented", and that the "wicked designs, wars, and evil practices of him, the said Charles Stuart, have been, and are carried on for the advancement and upholding of a personal interest of will, power, and pretended prerogative to himself and his family, against the public interest, common right, liberty, justice, and peace of the people of this nation."Charles I of England refused to plead during the trials and maintained that the court had no right over him. He was declared guilty and sentenced to death on January 26, 1649.

Charles I of England was executed on Tuesday, January 30, 1649, at 2:00 pm. His head was sewn back to his body, a day after the execution and was embalmed and placed in a lead coffin. He was interred in the Henry VIII vault on February 9, 1649.