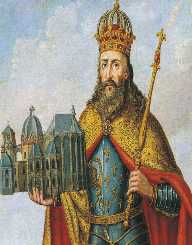 He was the king of the Frankish kingdom and first emperor of the Western Roman Empire since the fall of Rome.

Charlemagne was born in 742 in what is now Liege in Belgium. He was the eldest child of King Pepin. By the time he was born, his father was a royal advisor to the king. As the Mayor of the Palace, Pepin wielded immense powers in the Frankish kingdom. In 751 Pepin ousted the king and confined him in a monastery. Pepin the declared himself king of the Frankish kingdom.

Charlemagne thus became a royal prince in 751. He was schooled in administrative, diplomatic and military education as the future leader. He went with his father on many of his military invasions. In October 768, Charlemagne became king after Pepin died. In accordance with the Frankish traditions, Charlemagne and his brother Carloman were co-rulers of the divided Frankish kingdoms. After a period of intense rivalry between the two brothers, Carloman died in 771. Charlemagne assumed kingship of his brother’s part disinheriting Carloman’s heirs. The Carloman family went into exile in Italy.

Soon after his coronation as the unification king, Charlemagne attacked the Lombardy kingdom. King Desiderius had joined hands with Carloman’s sons to fight Charlemagne. Before that Charlemagne had married and divorced King Desiderius’ daughter. The bitter history came to the fore when the two kings went to battle. The Lombardy king was defeated and his kingdom annexed. He then attacked the southern Italian kingdom of Benevento.

In 772 the Frankish king went to war with the Saxons. The protracted war took many casualties. In 804 Charlemagne defeated the Saxons and conquered Francia. With the northeastern border safe, the king turned to the east. He conquered Bavaria and imposed his loyal aid as the new governor. Charlemagne waged war on the Huns. This was a nomadic nation that gained fame with their martial King Attila the Hun centuries back. He invaded the Hun territory in 791. By the fall of 795, Charlemagne had subdued the Hun nation.

In all the lands that he conquered King Charlemagne converted his new subjects to Christianity. By 800 he was the dominating ruler of nearly all of Western Europe save for Britain. Like his father Pepin, Charlemagne was a sworn protector of the papal lands. Papal lands were arrears which were under the jurisdiction of the Roman Catholic Pope. In 800 the Eastern Roman Empire was threatening to attack the Pope. Charlemagne reaffirmed his duty to protect the Pope. In return, Pope Leo III bestowed to him the title Holy Roman Emperor. Charlemagne became the emperor of the Western Roman Empire. The incursions by the eastern empire ceased.

From 1800 Charlemagne had a relatively peaceful reign. It was during this time that he instituted major reforms in his empire. He established new administrative laws to serve as the new constitution. The new administrative units were headed by royal agents that directly reported to him. He built a central command capital in Aachen in Germany. From his capital, all administrative and diplomatic missions were executed. This enabled him to unify the kingdom that was earlier fragmented.

In education and arts, he established schools in all the provinces. Charlemagne encouraged scholars to do more research and produce masterpieces in their field of studies. He used his close ties with the church to promote humanitarian activities. During his time, the Carlonginian Empire became peaceful and prosperous.

Emperor Charlemagne was a lover of athletics. He chose to remain in Aachen for his love of the vicinity. He could go hunting and ride horses in the nearby forests. He enjoyed the company of people and was a benevolent person.

During the late years of his reign, he suffered ill health. He disregarded the advice of medical practitioners to stop consuming roasted meat. To avert a succession crisis, he divided the kingdom to his three sons while still alive. Two of his sons died soon after that, leaving the youngest one. Charlemagne crowned his youngest son Louis the heir to the throne. On January 28 814 Emperor Charlemagne died of depression in Aachen. His remains were buried in the Aachen Cathedral compound.

His military, diplomatic and administrative reforms laid a foundation to the rapid development of Western Europe. To date, Charlemagne is revered in France, Germany, Italy, Belgium, and The Netherlands.