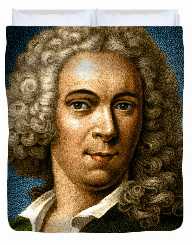 Carl Linnaeus was born 23 May 1707  Stenbrohult, Smaland, Sweden. He showed an interested in plants from an early age. Nils Linnaeus, his father, was a Lutheran minister, but Linnaeus showed no interest in following the family tradition. His interest was in studying medicine.

In 1727, he enrolled at the University of Lund. After twelve months, he changed over to the University of Uppsala. While there, his focus changed, and he became more interested in the study of plants. Medical schools offered courses in botany because, before pharmaceutical drugs, all medicines derived from nature. To further his education and understanding of plants, Carl Linnaeus went on a plant collecting expedition to Lapland in 1731, and another in 1734. The following year, he finished his medical degree at the University of Harderwijk in Holland. Still keen to study further, he did courses at the University of Leiden.

In 1735 he produced his Systema Naturae. At this early stage, his System Naturae was a pamphlet, but by now, Carl Linnaeus was associating with many of Europe’s botanists. This sharing his ideas about his classification system ensured that it would soon grow to a formidable, multi-volume size.

He returned home in 1738 to practice medicine. He did some lecturing as well. In 1741, he became a professor at the University of Uppsala and in 1750, he became the rector. Carl Linnaeus concentrated on his classification, and as part of that, he organized the university’s botanical garden by his classification system. He also made three scientific expeditions in various areas of Sweden. At this stage of world history, voyages of discovery were being undertaken. One of his former students, Daniel Solander, was invited by Joseph Banks to travel with him on the Endeavour, James Cook’s first voyage of discovery.

Solander assisted Banks to make an extensive collection of natural history specimens on the trip. Another student, Anders Sparrman, joined Cook’s second voyage. Many other students went on similar trips. Linnaeus’s Systema Naturae had by this time become a multi-volume system. In the age of discovery in which he lived, many new and unusual plants and specimens were discovered. Throughout the 1750s and 1760s, he continued with his work: collecting and classifying plants minerals and animals. Many arrived from places such  Australia, the Americas, New Zealand and the South Sea Islands.

Another project occupying his fertile mind was the Swedish economy and how to grow imported plants locally or conversely how to use native plants.  The Swedish climate was not ideal for coffee, bananas or rice nor was his idea of finding Swedish alternatives to tea, coffee, and flour.

Carl Linnaeus reformed botany. He established the principles early on;  then had the massive task of working out how to put it into practice. In 1751, he published  Philosophies Botanica which dealt with the theory of botany. This included the rules and laws to follow to describe, name and categorize. The next challenge being how to catalogue all the animal and plant species in the world using his system.

In 1747, Linnaeus was appointed Chief Royal Physician. Then in 1758, he was ennobled, taking the name Carl Von Linné.  When he died, he was one of one most highly respected scientists of his time.

In 1739 He married Sara Lisa Moraea. The couple had six children.

His father was a Lutheran minister. Carl Linnaeus was born into a family where some members had become clergymen

He spent his later years living on his estate in Hammarby. Around this time he organized a museum of his personal collections. After his death, Sir James Edward Smith, the English natural historian opened the Linnean Society of London and purchased all Carl Linnaeus’s book, manuscripts and natural history collections from his family.

His main legacy will be the establishment of the binomial system of describing living things. By doing so, Carl Linnaeus highlighted the relationship between living things and their environments, thereby establishing the importance of ecology.

The Swedish Museum of Natural History has some Carl Linnaeus’s original specimens housed in the  Linné Herbarium. It is possible to visit Linnaeus’s botanical garden as well as his manor home and garden at Hammarby.