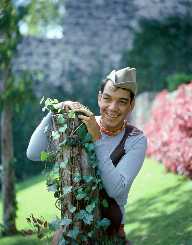 Mario Moreno gained the name Cantinflas for his profession as a comic film actor. He was also a screenwriter and a producer at the same time. The Mexican born actor later became a nationwide success thanks to his extraordinary comic skills. He was praised by renown comic celebrities such as Charlie Chaplin as the greatest comedian alive. He is also credited with helping Mexico transform during its golden age.

Cantinflas was born on August 12th, in 1911. His place of birth was in Santa María la Ribera, Mexico. His father, Pedro Moreno Esquivel was a mail carrier. His mother was called Pedro Moreno Esquivel. Cantinflas was the fourth born child in a family of eight children. During the early stages of his life, he went through several hardships, but he managed to become successful. His comic abilities pushed him to try out in circus shows. After this, he found himself in the theaters before being featured in some films.

Knowing very well that his parents would never allow him to venture into the entertainment industry, Moreno thought it was wise to have a nickname. As a result, he used the stage name, Cantinflas. This name would conceal his true identity from his parents.

Things were not smooth for Cantinflas at the beginning of his career. He had to try out several other careers before specializing in entertainment. He tried professional boxing and medicine, but they were not his calling. Soon, he worked in the circus traveling tents. It is from here that he took up the identity of a comic actor.

In the mid-1930s, Cantinflas crossed paths with Santiago Reachi who was a producer and a director. Together, they joined hands to come up with their own production business. They had different roles in their new business. Cantinflas work was basically to act, and Reachi would direct and produce these acts. Marketing them was also part of his duties. Cantinflas featured in his first film in 1936. This movie was called No te engañes corazón - Don't Fool Yourself, Dear. The first film did not perform well, and Reachi came up with the idea of short films. In 1940, Cantinflas comic role was highly acclaimed after featuring in Ahí está el detalle - "There's the rub." This movie was a major hit, and it proved to be a career turning point for Mario Moreno. Somos magazine later hailed the film as one of the top 10 greatest films to the released in Mexico.

His successful career gave Mario Moreno a Golden Globe award in 1957. This was an award for his exceptional performance in Around the World in 80 Days. Before getting this award, he had been awarded Special Ariel Award in 1952. Decades later, he was also given the Golden Ariel Award in 1987. This award is regarded as one of the most prestigious awards in the film industry of Mexico.