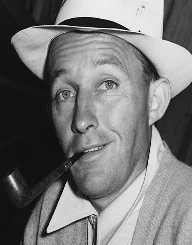 Harry Lillis Crosby Jr. best known as Bing Crosby is an award-winning American singer and actor. Born on May 3, 1903, he gained public recognition with his trademark relaxed and warm bass-baritone voice. His music career was met with the inception of technical recording innovations into the media world like the introduction of the microphone. With this, he became the first multimedia star and led record sales, radio ratings as well as motion picture grosses from 1931 to 1954.

Bing Crosby became the best-selling recording artist in the 20th century with more than one billion records, tapes, compact disks and digital download across the globe. His movie career was also an impressive one and is regarded as the third most popular actor at the time behind Clark Gable and John Wayne selling over 1,077,900,000 movie ticket. In 1954, he starred in White Christmas which became his famous movie grossing $30 million at the time. He has won several awards including an Academy Award and has been inducted into the Hollywood Walk of Fame for radio, motion pictures, and audio recording.

Bing Crosby was born on May 2, 1903, in Tacoma, Washington to Harry Lowe Crosby and Catherine Helen Kate.He was the fourth child of seven by his parents. At age three, the family moved to Spokane. Young Bing Crosby at age 14 took summer jobs at the Spokane Auditorium as a property boy. Working there, he witnessed the performances of some finest arts of the time Al Jolson who thrilled him with his electrifying songs. He graduated from the Gonzaga High School in 1920 and later enrolled at the Gonzaga University. He joined the school’s basketball team but three years into his education, dropped out without earning a bachelor’s degree.

Bing Crosby after dropping out of school became the eldest member of a band Musicaladercomposed of high school children in 1923. Other members of the group were Al Rinker, Miles Rinker, James Heaton, Claire Pritchard and Robert Pritchard.The group mainly performed at dances for club goers and high school students and did some radio sessions. It was however disbanded in two years later.

Bing Crosby however partnered with Al Rinker and got a job at the Clemmer Theater in Spokane. After working at the theatre's performers for several months, they moved to California and then to Los Angles where they met Rinker’s sister, singer Mildred Bailey.With her wide contacts, she introduced them to some partners and were later hired for thirteen weeks by Fanchon and Macro Time Agency for The Syncopation Idea show which started from Boulevard Theater in Los Angeles and then the Loew’s circuit.

After the show ended, they worked in the Will Morrissey Music Hall where they were discovered by Paul Whiteman organization who subsequently hired them. Their debut with Whitman was on December 6, 1926, at the Tivoli Theater in Chicago after doing their debut recording, I’ve Got the Girl with the Don Clark Orchestra in October same year. Their work with Whitman will inform the group, The Rhythm Boys.

As their performance dipped in a trip to New York, Whiteman concluded the decision, adding another member, Harry Barris, an aspiring songwriter and pianist and that was the beginning of The Rhythm Boys. The band became an instant hit and toured with Whiteman performing and recording with musicians like, Jack Teagarden, Bix Beiderbecke and Jimmy Dorsey which gave them lots of experience. The band later broke with Whitman to join the Gus Arnheim Orchestra to perform at The Coconut Grove Ambassador Hotel. There Crosby stood out as his performance became the center of attraction. He had a solo recording contract with Mark Sennett, who signed him to make short films and later left The Rhythm Boys.

Success As A Solo Singer

Bing Crosby made his solo debut on September 2, 1931, and signed with Brunswick Records and CBS Radio the same year. He had 15 minutes radio broadcast weekly which gained him some popularity. The Same year, he recorded the songs Out of Nowhere, I Found a Million Dollar Baby and At Your Command which also became hits and commercially successful. He became the highest selling artist in America at the end of the 1930s. He signed with Paramount and made his debut full-length feature film, The Big Broadcast in 1932.

In 1934, he signed a new record deal with Jack Kapp’s Decca. Bing Crosby career hit the roof, and his popularity grew each second. NBC hired him as host for their weekly radio program, Kraft Music Hall, a position he held for a decade. He produced several singles and records, but the most popular one was White Christmas in 1941. The album sold over 100,000,000 copies worldwide since its first introduction on a Christmas Day radio broadcast according to the Guinness World Records.

Bing Crosby acting career took America and the world by storm. He made several records and became the third most famous American actor of all time behind Clark Gable and John Wayne. His movie ticket sales are during his acting career is estimated at 1,077,900,000.His best-selling film was White Christmas, 1954 which grossed about $30million.Nonetheless, the production, that won him an Academy Award was Going My Way in 1944. Other works of Crosby include The Country Girl which also gained him an Academy Award nomination, High Time, The Road to Hong Kong and several others.

Bing Crosby married twice, first to Dixie Lee, an actress and nightclub singer in1930. They were blessed with children, Gary, twins (Dennis and Philips) and Lindsay. They married until the death of Lee from ovarian cancer in 1952. He then entered into a relationship with model Pat Sheehan, but the two never got married. Sheehan rather married Crosby’s son Dennis.

Bing Crosby also dated Inger Stevens and Grace Kelly, both actresses. In 1957, he married Kathryn Grant and had three children, Harry Lillis III, Mary, and Nathaniel. Bing Crosby died after a golf game in Madrid, Spain on 14 October 1977. Bing Crosby had flown to Spain on October 13, 1977, for a golf game with friends. According to friends, he was in a high spirit during the game, but the unfortunate happened afterward.

After the game, he and friend were heading towards the clubhouse when he collapsed about 20 yards from the clubhouse entrance and died instantly. There were several attempts to resuscitate him, but none worked and was confirmed dead at the Reina Victoria Hospital. According to friends, Crosby last words wereLet’s go get a coke while others say it was"That was a great game of golf, fellas."

Bing Crosby has won several awards including the induction of four of his songs, White Christmas, Swing on a Star, Pennies from Heaven and Don’t Fence Me In into the Grammy Hall of Fame.He has won an Academy Awards, a Golden Globe Award and four Photo Play Awards. He has been inducted into the Hollywood Hall of Fame three times for Radio, Recording and Motion Picture. He was also inducted into the Hit Parade Hall of Fame, 2007 and the Western Music Hall of Fame in 2008.