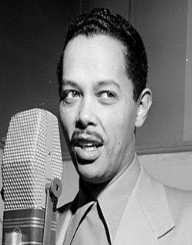 William Clarence Eckstine was an American singer who specialised in the jazz and pop genre. Born on July 8, 1914, he was also a bandleader during the swing era. Eckstine became known for his resounding and near-operatic bass-baritone. He started his band career with Earl Hines’ Grand Terrace Orchestra from 1939 to 1943.

He then formed the Billy Eckstine Orchestra before going solo in 1947. Eckstine’s 1948 recording “I Apologize” by MGM Records, won the Grammy Hall of Fame in 1999. He did several hit works including the revival of Tizol’s Caravan, Rodgers and Hart’s Blue Moon, Prisoner of Love, Everything I Have Is Yours and A Cottage for Sale among several others

William Clarence Eckstine was born on July 8, 1914, in Pittsburgh, Pennsylvania to Charlotte and William Eckstine. His father was a chauffeur and his mother a seamstress. He received education from Peabody High School, transferred to Armstrong High School and later at St. Paul Normal and Industrial School. After graduating, he enrolled at Howard University, but left in 1933, after competing and winning an amateur talent contest.

Billy Eckstine moved to Chicago where he joined Earl Hines’ Grand Terrace Orchestra in 1939. He served as a trumpeter and vocalist of the band until 1943. The following year, he formed a big band, Billy Eckstine Orchestra with members including Dexter Gordon, Fats Navarro, Dizzy Gillespie, Miles Davis, Charlie Parker, Art Blakey, and vocalist Sarah Vaughan. The band is considered the first bop big band. They released top ten chart songs like Prisoner of Love and A Cottage for Sale, all of which received a gold disc from the RIAA.

Billy Eckstine went solo in 1947, churning out several hit songs in the late 1940s. He earned a contract with MGM Records, following it with the hit recordings of like Everything I Have Is Yours, 1947, Rodgers and Hart’s Blue Moon and Juan Tizol’s Caravan in 1949. He continued to release hits upon hits including a revival of Bing Cosby’s I Apologize, and Victor Young’s My Foolish Heart. He became very popular that he was able to draw a larger audience to the Paramount Theatre in New York in 1950.

In 1957, his duet with Sarah Vaughan, Passing Strangers, reached No. 22 in the UK Singles Chart. In the 1960s he did some recordings for Mercury and Roulette and Motown and the Al Bell’s Stax/Enterprise imprint. His later albums include I Am a Singer, 1984, and Billy Eckstine Sings with Benny Carter in 1986, with title single winning a Grammy nomination.

Throughout his career, Billy Eckstine made several appearances on tv variety shows. The appeared on shows like The Tonight Show with Steve Allen, Jack Paar, and Johnny Carson, The Ed Sullivan Shows, The Mery Griffin Show, The Nat King Cole Show, The Joey Bishop Show, and The Art Linkletter Show. He was cast in the TV sitcom Sanford and Son and the films Let’s Do it Again, Skirts Ahoy, and Jo Jo Dancer.

Billy Eckstine married twice, first to June in 1942. The marriage ended in divorce after a decade in 1952. In 1953 he married actress and model Carole Drake with whom he had four children and two step-children. His children include singer Gina Eckstine, former president of Mercury Records, Ed Eckstine, actor Ronnie Eckstine, and former Columbia and Verve Records A&R executive and record producer, Guy Eckstine.

In April 1992, Eckstine suffered a stroke during a performance in Salina, Kansas. That became his last performance. A year later, he suffered a heart attack and died on March 8, 1993, at age 78.