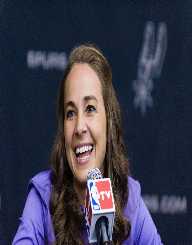 Becky Hammon was born on March 11th, 1977. Her place of birth was in Rapid City, South Dakota in the United States. She is the daughter of Bev and Marty and has two older siblings. Also, she has a brother called Matt. She was still quite young when she began playing basketball.

Becky Hammon attended Stevens High School in Rapid City and played at the school’s basketball team. During her junior years, she was South Dakota Miss Basketball. Later as a senior, she became the South Dakota Player of the Year. Her graduating class also named her the female class athlete.

Despite her great skills in the game, College basketball recruiters considered her too slow and too tiny. However, Colorado State University’s assistant coach realized her talent. Becky Hammon joined Colorado basketball team and became one of the best players in the history of the university. As a senior, she helped her team win in the NCAA Tournament with a Sweet 16 berth and 33-3 record. She later joined the New York Liberty.

Her shooting ability was amazing while playing for Liberty as a backup player. With her skills, Becky Hammon helped the team advance to the finals WNBA tournament. In 2003, she earned an All-Star selection, which was her first ever as a professional player.

In the WNBA offseason, Becky Hammon played for some teams such as clubs in Russia, Italy, and Spain. Furthermore, she helped the Colorado Chill become champions in 2005 and 2006. She was then presented with an MVP Award.

In 2007, she signed with the San Antonio Silver Stars where she continued being a star. The team progressed to the finals the following year. In 2008, she also became a Russian citizen. She played for the Russian team in the 2008 Olympics helping them win a bronze medal. Later in 2012, she also played for the team during the Summer Games.

Spurs hired Becky to be their basketball assistant coach in August 2014. Becky Hammon then became the first female ever in NBA history of major sports to become a full-time coach. In that year, she was selected as espnW's Woman of the Year. She made another history in 2016 when she became one of the NBA All-Star game’s coaching staff.

In 2011, rumors had it that Becky Hammon was in a relationship with Tony Parker. He is San Antonio Spurs NBA star.