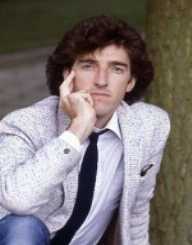 B. A. Robertson was born on September 12, 1956. He is a Scottish Musician, composer, actor, and songwriter. He is known for his co-write with Mike Rutherford and Ivor Novello award-winning ‘The Living Year.’ It was a number on a hit in the United States of America, Australia, Ireland and Canada. He has been a television presenter. He has also written music for films,

B. A. Robertson was born on September 12, 1956, in Glasgow, Scotland as Brian Alexander Robertson. He attended the former Allan Glen’s School, Glasgow.

In 1973, B. A. Robertson released his debut album ‘Wringing Applause’ which he recorded with Terry Manning. He recorded the album on the Ardent Record label. He released several albums between 1979 and 1981, that is, ‘Bang Bang,’ ‘Knocked It Off,’ ‘Kool in the Kaftan’ and ‘To Be or Not to Be.’ In 1981, he performed a duet with Maggie Bell of a cover version of ‘Hold Me.’

He also wrote ‘Hot Shot,’ ‘Carrie’ and ‘Wired for Sound’ for Cliff Richard. He also wrote ‘Language of Love.’ He sang and penned the theme music to the television series ‘Maggie’ and ‘Multi-Coloured Swap Shop.’ In 1980, he was a guest presenter on ‘Top of the Pops’.

In the same year, B. A. Robertson appeared as a guest on the BBC Television chat show ‘Friday Night, Saturday Morning.’ In 1981, he appeared playing in a live in concert on the show ‘Rock Goes to College.’ He starred in the movie ‘The Monster Club’ alongside Vincent Price, Donald Pleasance and John Carradine. He wrote songs for the band ‘Mike plus The Mechanics’ that is, ‘Silent Running’ and ‘The Living Years.’ In 1982, he wrote ‘We Have a Dream’ for the 1982 World Cup Scotland Squad. In the same year, he starred in the movie ‘Living Apart Together.’ In 1983, he won a Razzie Award for the worst original song for ‘Pumpkin and Blowin’. In 1991, he was billed as a producer and executive producer for ‘Simply Mad About the Mouse: A Musical Celebration of Imagination.’ In 2008, he appeared in the ‘Children in Need’ telethon performing a reworked version of ‘We Have a Dream.’

B. A. Robertson loves playing the piano. He is currently sixty years old.