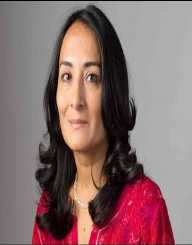 Asra Nomani is an American scholar, journalist and women rights advocate. Her advocacy for the rights of the woman in the Muslim world led to her expulsion from her local mosque.

Asra Quratulain Nomani was born in 1965 in present-day Mumbai, India. She is the daughter of Dr. Zafar Nomani, a doctor with extensive research on nutrition. Nomani comes from a family with a long history of scholars, both in contemporary and Islamic studies. She is a descendant of Shibli Nomani, a revered Islamic scholar from India. Shibli Nomani is one of the few scholars to have compiled the complete biography of the Muslim prophet Muhammad.

She spent her toddler years in India. At the age of 4, she moved with her family to the US. Her father left them in 1967 to pursue a Ph.D. degree in the US. The family settled in New Jersey for six years. In 1975, they moved again to West Virginia. Nomani graduated from a local high school. In 1986, she enrolled at the West Virginia University. Nomani graduated with an arts degree in Liberal Studies. In 1990, she earned her Master degree in International Communications from the American University.

Her checkered career started at the Wall Street Journal. She was employed as a journalist for the institution. As a reporting journalist, Nomani traveled from one city to another for information gathering. She then worked with The New York Times for a while. From New York, she went to the Washington Post and finally the Time Magazine. From the print media, she got a correspondent job at the Salon.com and was posted to Pakistan. On her return to the US, she continued working with print media and magazine publications like Sports Illustrated and Women’s Health.

Nomani was in Karachi Pakistan during the attacks on the Twin Towers in New York. The incident changed how she viewed her faith. Her fellow correspondent Danny Pearl was kidnapped and killed by Muslim fundamentalists in Karachi. Due to her investigative reporting of the death, she received death threats. Nomani became pregnant out of wedlock. The father of her baby abandoned her when he got the news of her status. The repercussions of conceiving out of wedlock in the conservative Karachi are fatal. She returned to the US.

Her family welcomed her back. But she started getting threats from the members of her local mosque. The congregation did not like her defiance of the standing traditions in the Muslim world. When she dared the authenticity of the separation of gender in prayer halls, she was put to trial by the mosque council. In 2003 at the end she was excommunicated from the mosque. She took her campaign to New York. Together with others, she organized a mixed gender public prayer. On March 18, 2005, the mixed gender prayers were held and led by Amina Wadud. In the 1,400 year history of Islam, this was the first recorded public mixed-gender prayer that was led by a woman.

The prayers made her resolve stronger. She has been fighting for the rights of women in various spectrums of life. Nomani challenges the patriarchal patronage of the Islamic society today. She argues that male dominance is a matter of tribal and ethnic traditions and not the heritage of Islam. She is keen to restore the rights of the woman under Islam as bestowed to them by the prophet Muhammad.

In her fight for Islamic justice, Nomani has written several books and journals. She wrote her first book Tatrinka: Travelling the Road of Divine Love in 2003. Her second book was published in 2005. The book is titled Standing Alone in Mecca: An American Woman’s Struggle for the Soul of Islam. The book was received with mixed feelings. The liberals advocated for it, while the conservatives condemned it. She has written notable journals to the leading media houses in the US.

In the phase of rejection, she voted for Donald Trump. Nomani does not ascribe to any political party. She had an admiration for Barack Obama when he came to power. In later years, she gravitated around the Republicans. Nomani has publicly stated why she voted for Trump as an immigrant Muslim woman. Trump was true to himself. Diplomacy cannot handle the terror group like the Islamic state.

Nomani is a scholar of great repute and resolve. She has endangered her life to champion for the rights of the marginalized woman in the Muslim world. Others view her as a paranoid mind out to tarnish the long-standing Islamic traditions.