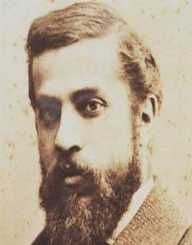 Antoni Gaudi i Cornet was born 25th June 1852, to Francesc Gaudi and Antonia Cornet i Bertran. He was born in Reus or Riudoms, Catalonia, in Spain. He was one of five children, although two died when they were young. His father was a coppersmith. Because there are no surviving birth documents, it can’t be ascertained where he was born, but it has been narrowed down to either Reus or Riudoms.

Antoni Gaudi was a sickly child, and very early on he decided to become a vegetarian. He also fasted throughout the years to try and improve his health. He studied at the Piarists school, which is the oldest Catholic educational order in the world. At the same time, he was also an apprentice at the textile mill.

In 1868, Gaudi moved to Barcelona. He studied teaching at the Convent del Carme. Even then he planned restoration of a monastery with his fellow students, and he designed various projects. Gaudi completed his military service from 1875 to 1878. He was on sick leave most of the time, so he was able to continue with his studies.

Antoni Gaudi was studying architecture at both the Llotja School and the Barcelona Higher School of Architecture, from where he graduated in 1878. He studied other subjects as well including history, economics, philosophy, and aesthetics. He paid for his studies by working as a freelance draughtsman.

One of the architects Antoni Gaudi worked for was commissioned by the government to carry out the Parc de la Ciutadella development which took nine years, between 1873 and 1882. Gaudi was responsible for various aspects of the project including the water project and entrance gate to the park. He also worked on several other projects for monasteries and churches.

After graduation, Gaudi’s first commission was from the Barcelona City Council to do a set of lampposts for the Piaca Rejal. Gaudi’s work became well-known, and he received many significant commissions from various sources. Some of his best work was done for Eusebi Guell, a businessman from Catalan. Gaudi did the Guell pavilions, the palace, the park, and the crypt of the church.

In 1883, Antoni Gaudi was commissioned to build the Basilica I Temple Expiatori de la Sagrada Familia church in Barcelona. He changed the initial plans of the building and spent the latter years of the life devoted to the project. Gaudi had become extremely famous, and he had a team of workers that took on his commissions as there were far too many for Gaudi to work on personally.

As Antoni Gaudi's reputation grew, he began to travel across Spain. He received two commission from Leon which helped his status even further. His network grew as he joined the Saint Luke Artistic Circle in 1899, and he also joined the Spiritual League of Our Lady of Montserrat.

In 1910, the Grand Palais of Paris held an exhibition of his work. Count Guell had invited Gaudi to participate, which he did, displaying plans and pictures, and plaster scale models of various jobs he had created.

Antoni Gaudi had several friends and family between 1910 and 1918, including Eusebi Guell. It is believed he devoted himself to the building of the church in Barcelona for the last years of his life because of all the tragedy he had been through. It became known as the Cathedral of the Poor and Gaudi accepted donations to continue with his work there.

Throughout his years of design, Gaudi went through several periods including, his Oriental period, Neo-Gothic period, and his Naturalist period. Very few documents have been kept or preserved, although there is a document called the Reus Manuscript which was a student diary he kept between 1873 and 1878.

Antoni Gaudi never married but stayed devoted to his work and his faith.

He died on 10th June 1926. He had been hit three days earlier by a tram, and because he didn’t have identity papers on him, it was thought he was a homeless person. By the time he was recognized two days later, it was too late.

Antoni Gaudi's works lost favor after his death. During the Spanish Civil War in 1936, his workshop was trashed and many of his documents destroyed. By the 1950s, people were once again becoming aware of his work, and in 1976 for the 50th anniversary of his death, an exhibition on Gaudi was held at the Museum of Modern Art in New York City.

In 1984, several of Gaudi’s most important works were listed as World Heritage Sites. These include the Park Guell, the Palau Guell, and the Casa Mila. There were further works recorded in 2005. He has been recognized as one of the most important contributors to design and architecture during the late 19th and early 20th centuries.

In 2008, the Gaudi Awards were established by the Catalan Film Academy.