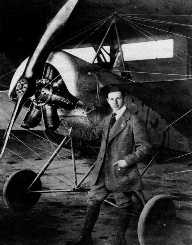 Anthony Fokker’s name is inexplicably linked with a series of airplanes that he designed, and in the end, they were used by the Germans in the course of WWI. Known as a native American Fokker designed his first aircraft at 20 years old. It was in 1910 that he taught himself how to fly. The following year Anthony got a chance to establish his one small aircraft enterprise that was located in Wiesbaden.

It was here Anthony Fokker created his first aircraft titled Spin 1.This paved way to another of his successor called Spin II that didn’t prove much of his determination. It was his third plane Spin III that brought out his profound results and the German authorities purchased the aircraft in 1913. Besides, Anthony was highly known as a manufacturer of robust airplane machine guns that were used during the World War I.

Anthony Fokker's life is quite fascinating. He was a hardworking man, but at the same, he envied his life because he loved his career. Anthony was there when aviation was introduced into the world. He took the time to prove to the Wright Brother’s that he was also capable of creating his aircraft.

During his tenure, there was little to no information about the structural strength and weaknesses of aircraft. But Fokker experimented with more than one model and in the process, he formed his theories. It came to a point where he risked his own life when he tried to test his new designs. It came to a point where he realized that he stayed alive through luck. At first, it was quite hard for him to control himself in the air. It took both skill and chance for him to survive. Anthony Fokker achieved lots of things during his teenage life, and he professionally solved his struggles with less effort.

On April 6, 1890, Anton Herman Gerard Fokker aka The Flying Dutchman was born in Indonesia, Kediri, and East Java. His father Herman Fokker was an entrepreneur, and he wanted nothing else than perfect future for his two children. It was here that he opted to move his family to the Netherlands where they permanently settled in Haarlem.

As much as he loved aviation field, Anthony Fokker hated to study. This led him to drop out of school. He loved everything that dealt with mechanics, and he loved to make his things. In 1908 Anthony heard about Wilbur Wright exhibition where he devolved an intense interest in aircraft. It was here that he began to do his research before coming up with new designs.

Early in 1910, Anthony Fokker joined Bingen Technical School in Germany where he majored in automobile mechanic. Since he had more interest in aircraft, he was transferred to another aviation school in Mainz, Germany. The same year Anthony created his plane that he called The Spider or Die Spinne. But it didn’t take long when his friend destroyed it due to a sudden accident. This is where he came up her second innovation that he called The Spin. It was his second aircraft that earned him the aviation license.

In the mid of 1911 Fokker rose to fame when he formed his third aircraft version called Spin in Haarlem. It was good for him to launch his third aircraft the same day when Queen Wilhelmina was celebrating her birthday. With his father’s support, Anthony went to Berlin where he started his first aviation company Fokker Aeroplanbau.

Before the closure of the 19-century, Berlin was known as the center of airplanes innovation. There were more than fifty enthusiasts and innovators. For him to be noticed quickly, Anthony Fokker assembled his best aircraft in front of German military central base. It was here that the German armies saw his profound talent where they ordered two planes without a doubt.

At the beginning of the WWI in 1914, Fokker was selected as the director of the German government aviation; The Imperial German Air Service. In the course of the war, Fokker manufactured over 800 planes where he distributed to military bases in Germany. He produced planes such as Fokker Dr and Fokker Eindecker.

Early in 1915, Anthony Fokker came up with a scout aircraft. It was unique due to its bulletproof function. After profound piloting that was done by Max Immelmann, the Germans ordered dozens of similar airplanes. However, Fokker’s factory was affected when the Germans surrendered in regards to Treaty of Versailles. To avoid additional loss, he distributed some his designed airplanes to Holland. It was in the same process that he re-introduced his factory in the Netherlands. He named it as Dutch Aircraft Factory.

In the mid of 1927, Anthony Fokker founded Atlantic Aircraft Company. The company later transformed into General Aviation Corporation after five years when he sold it to General Motors.

In 1916 Anthony Fokker introduced an early-designed two pair of wings aircraft that carried adjustable machine guns. It was known as Fokker’s D-7 that played a significant role during the 1914 WWI. His American based factory produced aircraft such as Fokker F-VII.

In 1919 Anthony married Sophie Marie Elisabeth, but they called it quit after four years of courtship. In 1927 he married Violet Eastman, but she died later when she accidentally fell from their hotel room window. After 12 years Antony breathed his last on December 23, 1939, due to pneumococcal meningitis.