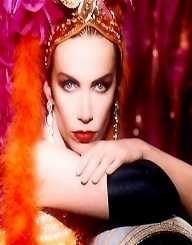 Annie Lennox was born on December 25, 1954, in Aberdeen, Scotland. Her parents are Dorothy Ferguson and Thomas Lenox.

As a teenager, Annie Lennox attended the Aberdeen High School for Girls. By this time, she had already spent several years learning how to play music. She had begun taking piano lessons in primary school, and her love for music had carried on into her high school years.

After graduating from high school, Annie Lennox went to on attending the Royal Academy of Music, London. While at this school, she was a member of a few small bands.

After graduating from college, Annie Lennox went on to play the flute in the band, Dragon's Playground for a short time before helping to form the band, The Tourists, in 1976. Other members of this band included David Stewart, Peet Coombes, Eddie Chin, and Jim Toomey. The band released their first album, The Tourists, in 1979. Later in the same year, they released their second album, Reality Effect. This album was certified Silver in the UK. In 1980, the band released their last album, Luminous Basement, before breaking up in the same year.

In 1981, Annie Lennox formed a new band, Eurythmics, with her The Tourists member, David Stewart. In the same year, the two released the band’s first album, In the Garden. Later on, in 1983, the band released their most popular album to date, Sweet Dreams (Are Made of This), the album’s song of the same name would later go on to become the band’s most famous song, which has since been covered by many other bands. The band continued to release albums all throughout the 1980’s. Some of the band’s most popular albums include Touch, Be Yourself Tonight, Savage, and Revenge.

In the 1990’s, Annie Lennox left Eurythmics to begin her solo career. Her first solo album, Diva, was released in 1992. Her new solo stylings were much different than what she had produced with Eurhythmics. She later released her second solo album, Medusa, in 1995. In this album, she covered various songs. Later, in 1999, she regrouped with David Stewart for one last Eurythmics album, Peace.

Since 2000, Annie Lennox has been focused on her solo career. She released her third solo album, Bare, in 2003. Her other most recently released albums (with her latest being in 2014) include Songs of Mass Destruction, A Christmas Cornucopia, and Nostalgia.

Over the course of her long musical career, Annie Lennox has also been involved with various charities. She has been known to throw charity concerts with other musicians to raise money for good causes. Some of the charities she has held concerts for including the Treatment Action Campaign and for AIDS treatment and prevention in Africa. Some of the other charities she has worked with are listed below.

Both Lennox’s musical career and charitable givings have earned her a great number of awards. Some of her most impressive awards are listed below.

Annie Lennox is a UNAIDS Goodwill Ambassador. Lennox is an Officer of the Order of the British Empire. She was given this honor for her charity work with those suffering from AIDS in Africa.