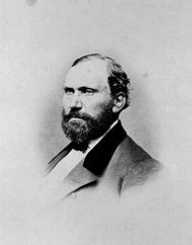 Allan J. Pinkerton was born on August 25, 1819, in Gorbals, Glasgow, Scotland. His father William Pinkerton died when Allan was ten years old. After his father’s death, Allan had to leave school. He continued to read in his spare time and was largely self-educated. Pinkerton trained to be a cooper and as a young man became active in the British Chartist Movement. In 1842, he secretly married Joan Carfrae and emigrated to the United States.

In 1853, Allan Pinkerton went to the Dundee Township in Illinois, where he built a cabin and started a cooperage. He also worked for the Chicago abolitionist leaders. He first got interested in the criminal detective work after he stumbled upon a band of counterfeiters around Dundee. The band was believed to be a part of the notorious group Banditti of the Prairie. He observed the group’s movements for some time and later informed the local sheriff. The group was arrested, and this led to Pinkerton’s appointment as the first police detective in Chicago in 1849.

In 1850, Allan Pinkerton and his friend, the attorney Edward Rucker collaborated to form the North-Western Police Agency, which later became the Pinkerton National Detective Agency. His business slogan was “we never sleep.” With the increase of the rail transport and expansion of US territory, the company began working on solving series of train robberies. Many of these robberies were solved since Pinkerton was on good terms with the Chief Engineer and Vice President of Illinois Central Railroad, George McClellan, and his lawyer Abraham Lincoln.

After the beginning of the American Civil War, Allan Pinkerton began serving as the head of the Union Intelligence Service. Many of his agents were working undercover as Confederate soldiers. Pinkerton himself worked undercover as a Union soldier using the name Major E.J. Allen. Pinkerton’s work led to forming the Intelligence Service, which later became the U.S. Secret Service.

After the end of the war, Allan Pinkerton continued to work in his company, solving train robberies. He was hired to capture the outlaw Jesse James but failed. The railroad companies withdrew the financial support, and Pinkerton took up to capture him. In 1872, Pinkerton was hired by the Spanish Government to help to suppress the revolution in Cuba, meant to end slavery and give its citizens rights to vote. However, Pinkerton was not aware of the consequences of his work.

Allan Pinkerton died in Chicago in 1884. The reason for his death is not known, but it has been speculated that he died of a stroke, or to malaria, which he had contracted during a trip to the Southern United States. Around the time of his death, Pinkerton was working on a system to centralize and identify all the criminal records. The Federal Bureau of Investigation now maintains the database.

His agency continued to operate after his death and became a major force against the labor movement in Canada and United States.

Allan Pinkerton and his wife Joan had three children- William, Robert, and Joan.