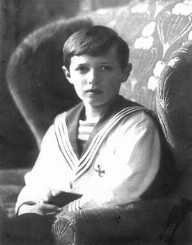 Alexei Nikolaevich was the son of the Russian King Nicholas II. He died at a young age due to his Hemophiliac disease.

He was baptized according to the Russian Orthodox faith on September 3, 1094, in the royal palace in St. Petersburg. His christening was a state function. Tsar Nicholas II missed the baptism according to the church tradition but invited all the domestic and foreign dignitaries in Russia.

He became a national treasure as the only prince to the Tsar of Russia. Two months into his life, he started showing sickly characteristics. After a thorough diagnosis, doctors found his ailment. Nikolaevich was suffering from hemophilia B. The disease prevented the blood from clotting in case of any bruise or cut. He inherited the disease from his maternal great grandmother, British Queen Victoria.

Nikolaevich could not venture to play like any other child. His parents feared his bleeding and other complications associated with the illness. As the royal prince and heir apparent, he was exposed to the military at an early age. In 1909, Nikolaevich was assigned two naval soldiers to monitor his activities. The two sailors Andrey Derevenko and Klementy Nagorny were given strict orders to ensure he does not injure himself.

Though his activities were limited, Nikolaevich got injured on numerous occasions. Some bruises resulted in prolonged bleeding and pain. In such severe circumstances, Nikolaevich remained bedridden in excruciating pain. Tsar Nicholas II became worried about the prince. Prince Nikolaevich became suicidal in times of pain and immobility. When the injuries healed and the pain disappeared, Nikolaevich returned to his old normal self.

While the prince suffered, the Russian Tsar and his royal court treated the ailment with utmost secrecy. The king and queen forbade anyone from talking about the prince and the disease. Nikolaevich was treated by the best physicians in the Russian Empire. He continued suffering from his disease.

Gregorio Rasputin, a monk from Siberia in the Russian north was introduced to the king. He claimed to have healing powers to help the young prince. In a few incidences, Rasputin managed to help the prince recover from his bleeding and pain. Tsarina Alexandra ordered Rasputin to be the royal court physician attending the prince.

While on a royal retreat, Nikolaevich fell and injured himself on September 5, 1912. The prince suffered hematoma for the next few days and recovered. He fell again on October 2, 1912, and ruptured his wound again. His condition worsened and the royal family informed the empire of the imminent death of the prince. In the bulletin to the nation, the Tsar informed the subjects that the prince was given the last sacrament. This is a ritual done to a Christian of the Eastern Catholic faith prior to his death.

In the last minute rush to salvage the prince from death, Tsarina Alexandra sent for Rasputin. When he arrived, Rasputin prayed and performed his healing rituals to the prince. In a few days, the prince recovered. On October 19, 1912, Nikolaevich was out of danger. His pain had gone and his hematoma had cleared. Although not a trained doctor, Rasputin stopped the intake of aspirin by the prince. He noted that aspirin abetted in the thinning of the blood, thus preventing the natural clotting of the blood. Rasputin gained the trust of the Russian queen.

As he grew, Nikolaevich gradually became aware of his condition. He accepted the hard fact that he will not live to adulthood. Nevertheless, he started behaving like an heir apparent. He studied with private tutors in the Alexander Palace in Tsarskoye Selo city. He became eloquent in four major European languages English, French, German and his native Russian. He started attending official state ceremonies.

In 1915 he was introduced to the military life. Nikolaevich seemed to enjoy the military than the official state functions. He endeared himself to the Russian soldiers for his compassion and empathy to the soldiers. He visited the Russian military headquarters and ate the military bread with them. In 1916 at the age of 12 years, Nikolaevich became a Lance Corporal of the army.

During WW1, the Russian Tsar Nicholas became a beleaguered monarch. In March 1917, he abdicated the throne to his brother Mikhail. Nicholas II retreated to Tobolsk in August 1917. In October 1917, the Bolsheviks led by Vladimir Lenin toppled the monarch. They were arrested in Tobolsk and transferred to the town of Yekaterinburg.

Nikolaevich and his family were executed by the Bolshevik communists on July 17, 1918. They were buried in unmarked graves.

Nikolaevich and his fallen family were elevated to sainthood under the Russian Orthodox Church in 2000.