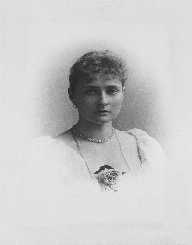 Alexandra Feodorovna was the last Tsarina of Russia. She was one of many granddaughters to Queen Victoria of England. This daughter of German royalty married Tsar Nicholas II of Russia. Bolsheviks killed she and her entire family as part of the Russian Revolution in 1918.

Alexandra Feodorovna was born at the New Palace in Darmstadt on June 6, 1872. She was known as Her Grand Ducal Highness Princess Alix Viktoria Helene Luise Beatrix of Hesse and by the Rhine, a Grand Duche that was part of the German Empire at the time. Her father was Louis IV, Grand Duke of Hess and by the Rhine, and her mother was Princess Alice of the United Kingdom.

Her mother was the daughter of Queen Victoria. She was the sixth of seven children. Her younger sibling, Marie Victoria Feodore Leopoldine, died at age four of diphtheria, along with her mother. After this happened, she and her siblings spent holidays with Queen Victoria in England.

Alexandra Feodorovna and Nicholas met and fell in love at the wedding of his uncle, Sergei, to her older sister, Elisabeth. Both were from royal families who were linked both by blood and by social ties. For example, Nicholas’ mother was Alexandra’s godmother. Unfortunately, the couple met with stringent opposition.

Alexandra felt pressured by Queen Victoria and her father to marry her cousin, Prince Albert Victor, Duke of Clarence and Avondale. Queen Victoria was set on Alexandra becoming the next British queen. However, the strong-willed Alexandra turned down his proposal in 1890. Queen Victoria saw her protestations as a sign of strength.

Nicholas too was facing pressure. His father pressured him to marry Princess Hélène of France. Nicholas had no interest in her, and she did not want to convert from Roman Catholicism to Russian Orthodoxy. She went so far as to appeal to the Pope with her case. This was enough to end the pressure on Nicholas.

Nicholas proposed. Alexandra turned him down the first time. She was a devout Lutheran and did not relish the thought of converting to Russian Orthodoxy. Several of her family members discussed the matter with her, and she relented. Finally, as the former Tsar lies on his deathbed, he gave their engagement his blessing. They were wed at the Grand Church of the Winter Palace in November of 1894.

The couple was coronated on May 14, 1896, once the period of mourning for Nicholas’ father was over. Then, they settled down and had several children. The first four were all girls. Alexandra became worried; they had to have a male heir. In 1903, she experienced a false pregnancy or pseudocyesis.

The following year, in 1904, Alexandra Feodorovna gave birth to their only son, Alexei. Sadly, due in part to the extensive inbreeding of all the royal houses of Europe, Alexei was born with hemophilia. At the turn of the 20th century, it was very likely a death sentence. Alexandria was desperate and turned to mystics and faith healers. One healer would eventually hold sway over the royal family; therefore, the country. His name was Rasputin.

Rasputin was at best a controversial figure. He convinced the Tsarina that he could and did heal her son. In exchange, she offered him ever-increasing influence and power. The Russian public viewed him as a charlatan and a menace. The fact that he held such influence over Alexandra did not win her much support. To begin with, they were suspicious of her because she came from Germany.

When World War I erupted, pitting Germany and Russia against each other, this did not help matters. Nicholas departed for the front, leaving Alexandra Feodorovna as Regent in 1915.  She was inexperienced with political and economic issues, and she leaned on Rasputin and other inept or corrupt advisors for guidance.

The dowager empress, Nicholas’ mother, is said to have collaborated with other nobles to overthrow her son in a Coup d’état to salvage the throne. When Alexandra discovered the plot, she convinced Nicholas to exile his mother from the capital.

After WWI, the economy was in shambles. Also, too many men were called away from the fields to fight and die. Food shortages and infrastructure problems were making it difficult for the public to function. Strikes formed. The Duma and elected legislature challenged the Tsar to do something. He dissolved the Duma.

The Duma demanded he abdicates. After some tense times, he did. There was discussion regarding exiling Nicholas, Alexandra, and their children to Britain, but King George V did not wish to be associated with such unpopular royals. Instead, they were imprisoned from 1917 to 1918. On the morning of July 17, 1918, a detachment of Bolsheviks entered the house where the Romanovs were held. The entire family was shot and stabbed. Alexandra died with her family that day.