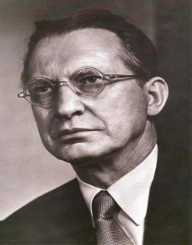 Born in Pieve Tesino in the Tyrol, Austria-Hungary on the 3 April 1881, Alcide de Gasperi served as the prime minister of Italy after World War II between 1945 and 1953.

De Gasperi graduated from high school in Trenet. He then enrolled at the University of Vienna where he studied literature and philosophy.

De Gasperi, edited the journal II Nuovo Trentino and was influential in promoting Italian interests. By 1911, he was the Italian representative in the Austrian parliament. And in 1919, he became the deputy of the Italian parliament. He was also one of the founders of the Partito Popolare Italiano Party, the PPI. The PPI was a liberal party opposed to fascism.

Because of his political activities, de Gasperi was sentenced to four years in prison in 1926. He spent over a year in jail, then worked at the Vatican in Rome as a librarian. After World War II broke out in 1939, de Gasperi took part in in the resistance movement fighting Mussolini’s fascists.

As prime minister of Italy, de Gasperi signed the peace treaty with the Allied Forces. He worked to unify Italy after World War II (1939-1945) and oversaw the implementation of the new Italian constitution in 1948. Other initiatives the rebuilding of the country’s economy with various programmes. When his government was voted out in 1953, he was appointed the Secretary General of the Italian Christian Democratic Party. He was elected president of the Assembly of the European Coal and Steel Community in 1953.

Along with Monnet, Schuman, and Adenauer, he was responsible for the idea of the European Common Market. The common market started with the creation of a steel and coal market between France, Germany, Belgium, Netherlands, Luxembourg, and Italy. He had hoped to organize a European Defence Community but the idea was vetoed by the French Assembly in 1954.

Married to Francesca Romani from 1922, they remained married until his death.