You are a Sagittarius woman if you were born between November 23rd through December 21st.

The Sagittarius woman personality is a curious lady. She wants to learn as much as she possibly can, but she won’t just store this information. She will want to look over what she learns from her own point of view and apply it to her own life or the social issues around her.

The Sagittarius woman personality traits show she has a rather philosophical view on life and herself, and she will apply logic to her life as often as possible. This makes the Sagittarius woman’s life more organized than some of the other star signs, but it still keeps her life interesting.

The Archer is constantly learning new things that change her life and her view on the world in various ways. The more she learns, a better person she can be. She lives to teach others what she has learned as well. 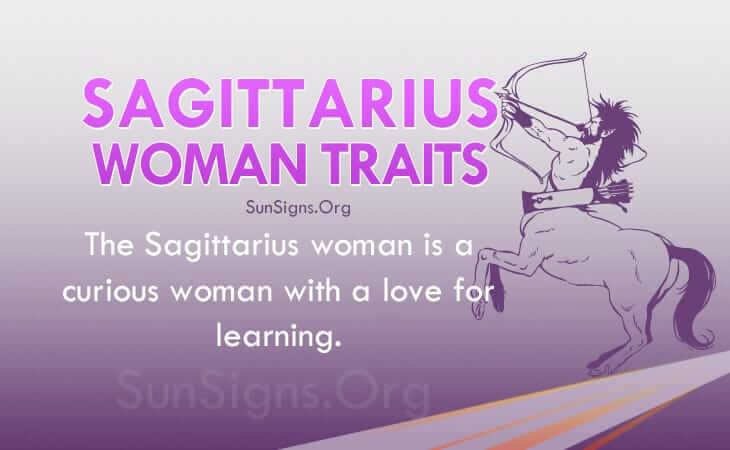 The Sagittarius female thinks ideally, knowing that the world would be a better place if only everyone could be educated not only in math and languages, but also about the various cultures and values that help to make up the world.

The Sagittarius woman traits show she is anything but narrow-minded. She will take the time to talk to new people so that she can learn about their lives. The Sagittarius lady finds other people to be interesting and a source of knowledge. She is especially attracted to friends that are different from herself in their ethnic and social background.

She feels like she can learn the most from these kinds of people. Because of this view on people, she is likely to travel to faraway places during her life. A young Sagittarius woman may join the peace corps to travel and educate others.

The Sagittarius woman characteristics show she loves to teach other about the truths of the world. She has no time for narrow-minded people who can’t see outside of their own point of view. She will want to make friends with people who have as broad as a mind as she does.

The Sagittarius woman traits show she is not afraid to tell off people who are too stubborn to see the world in other ways, especially if there are wrong in the way that they are thinking. A Sagittarius woman will hate anyone who is a sexist, racist, or homophobic.

These kinds of people just seem under-educated in the eyes of the Sagittarius woman. She won’t care if she hurts the feelings of these types of people. She is, of course, kind of open-minded people like herself.

The Sagittarius woman personality needs to have her independence if she is to travel and learn about everything that she wants to learn about. She won’t want anyone else telling her what to do or where to be. She wants to be free to do what she wants to.

The Sagittarius personality traits show she won’t be happy unless she can have this freedom. She knows that she needs freedom so badly that she is willing to fight for it if she has to.

The Sagittarius woman personality traits show she will want a partner who is as spirited and full of life as she is. Of course, she won’t settle for someone who isn’t open-minded like she is. She will want to be with someone who is willing to fight for what they believe in.

She is one to care for her partner deeply, and stay by their side for a lifetime so long as they are just as loyal to her. Her passion for the world can also become a passion in the bedroom if the relationship between her and her partner is going well.