Even though the Libra woman Capricorn man zodiac signs are opposites, the female scale and the male goat can find some common ground, as long as she is traveling the same path he is. Steadfast and driven, he is working his way up the ladder to achieve success in all areas of his life.

The Libra woman, on the other hand, is more analytical and thoughtful in nature. She stops to consider all possible sides of an issue while he simply barrels his way through the debris. As an air sign, she comes up with all sorts of ideas, and the earth sign can help her to achieve them.

The bedroom is one place where the Libra woman Capricorn man can support each other, as she can be indecisive and he is resolute in his words and deeds. On the other hand, she can also help him to loosen up and go out for fun rather than work. And if there is a deep enough attraction, this couple will take the next step into the bedroom.

Again, it will take effort from both the Libra woman Capricorn man partners to experiment and find a balance in their love compatibility that they can each enjoy. Luckily, this is Libra’s strong suit, and she has a Capricorn mate who will work just as hard as she does to find something that works.

And it is this determination that will help the Libra women and Capricorn men create a peaceful co-existence. Even though he doesn’t care about buying trinkets and the Libra female likes lavish gifts, he works hard enough to afford surprising her with what she loves. And he appreciates logic above all else, which is something she offers in spades. 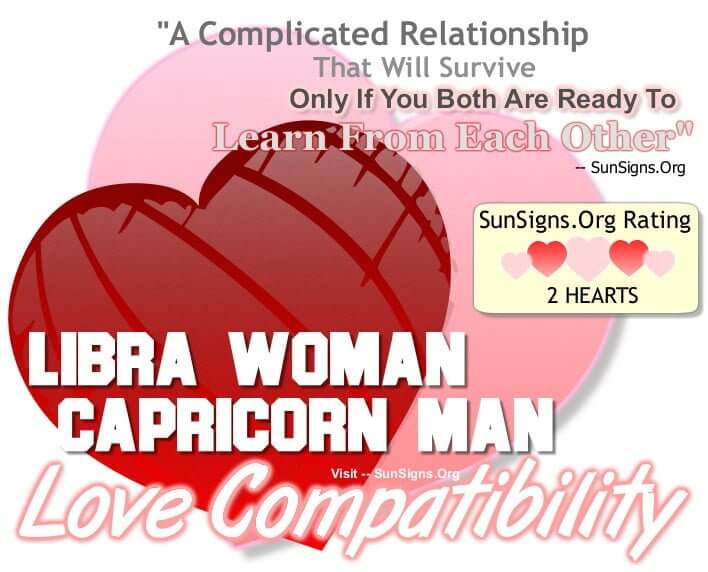 Sexual compatibility is something where the Libra woman and Capricorn man will not connect immediately, for she is romantic and sensual and he is more physical and grounded. The Capricorn male doesn’t care for candles or flowers – he wants a simple, straightforward sexual union.

Meanwhile, the Libra female enjoys affectionate gestures and lively foreplay. She likes to play mind games, while he wants to go right into the physical act of lovemaking. He is practiced in a set few techniques, where he shows great attention to detail. But she likes to mix things up once in a while.

Now this isn’t to say this couple will not have a fun time between the sheets. She can help him to try new things and he can teach her some of his most skilled routines to improve their sex life.

The Libra woman Capricorn man match have arguments about anything and everything, for she likes to argue even his most stubborn beliefs and he can stand his ground. And he is a very patient man who will be able to tolerate her hesitations when it comes to making decisions.

The Capricorn male probably go ahead and make the choice for her, which can be good or bad. If she eventually agrees with him then all is well. But if she doesn’t they will have to find a way to compromise so that she can restore her sense of balance.

Libra is a cardinal air sign whereas Capricorn is a cardinal earth sign, the Libra woman Capricorn man compatibility gets a TWO Hearts rating. You will not find a more loyal pair, and if they are willing, they can go the distance.