How compatible are Libra women and Scorpio men mentally, emotionally and sexually? The match between the Libra woman and Scorpio man is not an instant one, as she is fun and flirty and he is dark and mysterious. While she seeks to achieve balance throughout life, he always sees things very clearly. But these two sun signs can often connect on an intellectual level.

The Libra woman is social and charming, talking to everyone at a party and engaging in stimulating conversations. This catches the attention of the male scorpion, who enjoys witty banter and sharp debate. She gives the Scorpio man that and more, as she looks at both sides of an issue to determine what’s right.

The Libra woman and Scorpio man examine each other’s beliefs and appreciate the challenge of defending them. However, the Scorpio male’s personality may be a bit unsettling for her at times, because he doesn’t reveal everything about himself.

And this is something she will struggle with throughout the relationship, for she wants to maintain harmony between them. The Scorpio man may make that difficult if she doesn’t know what he’s thinking or feeling.

And because Scorpio men are so steadfast in their views, they won’t be willing to change just to give the Libra woman a little bit of peace of mind. But if there is enough of a mental attraction in this relationship, she will decide to take things into the bedroom.

Here is where their personalities are complementary, for the Libra female is sensual and romantic and he is caring and passionate. He will automatically take the lead, which will be okay with his Libra partner for a time. She can start things off with affectionate gestures and slow foreplay, and he takes it to a powerful climax. 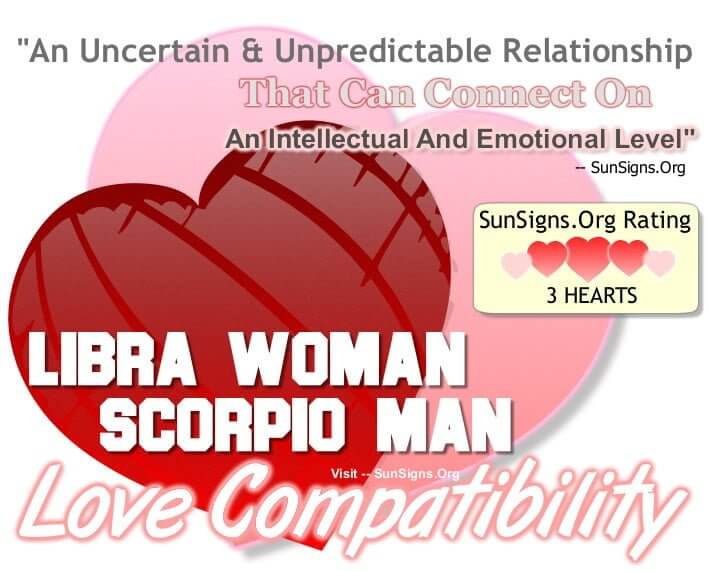 The only thing that can get in the way of the Libra woman Scorpio man lovemaking is his intensity. As a water sign, his emotions can overflow in the bedroom, causing waves of fury and lust to wash over himself and his partner. This may be too much for the airy Libra, for she experiences their lovemaking on a more cerebral plain.

While the Scorpio male can keep up with her mind games, eventually he wants to bring their union down to a more physical level. If they want to meet in the middle, he will have to dial back some of the intensity and she will have to add more primal touches to her sexual approach. But because the Libra female wants to achieve balance between the sheets she is willing to work at reaching a compromise in their love compatibility.

And that kind of effort will have to continue outside the bedroom, as the Libra woman and Scorpio man tend to lead different lives. He is driven and ambitious, and carefully manages his career, family and finances. She is less organized, and enjoys spending her money on more lavish items.

This can drive him crazy and cause his stinger to lash out at his mate. This will be a surprise to her, and she will respond by figuring out the best solution for their problem. But if she takes too long he will grow impatient and implement a solution of his own. This may continue the rift between the Libra woman Scorpio man pair if she doesn’t agree with his decision.

Patience is key between these two zodiac signs, for the Scorpio man will have to deal with her indecisiveness and she will have to manage his fierce attitude.