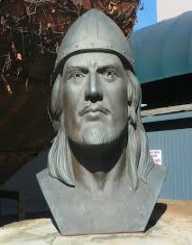 Leif Erikson was the earliest known European to have landed on the American continent. Though he never settled or colonized any part, his accounts led more Europeans to voyage across to the new land.

Though historians debate on this issue, it is believed that Leif Erikson was born around the year 970. His parents Erik and Thorhild Thorvaldson lived Iceland at the time of his birth. He was the eldest in the family. His other siblings were his Thorvald, Thorstein, and Freydis.

Erikson spent his early childhood without his father. His father better known as Erik the Red was found guilty of murder and banished. He left Iceland and headed westward in search for a place to stay. He could not go to Norway as he had been expelled earlier. He landed in Greenland with his family, workers, and slaves in Brattahlid. After a while, he relayed word in Iceland that there was new land good enough for human settlement. Many daring people followed him and created the first community there. In respect to his efforts, the people chose Erik the Red as their chief leader.

Leif Erikson grew up under the care of Tyrker. Tyrker was a German who worked for Erik the Red. Erikson learned several languages and the art of seafaring.

Leif Erikson sailed off to Iceland in 1000. He was invited to the royal palace by King Olf. Erikson converted to Christianity while in the palace. After his conversion, he returned to Greenland. He started his evangelism and got some converts including his mother.

When another Icelandic explorer returned with stories of some land he had seen, Leif Erikson became excited. That same year 1000, he prepared his ship and crew and headed west for the new land. They sailed the high seas for some days and reached the new land. It is believed that the land they first landed on is present-day Canada.

Erikson and his men landed on some barren rocky area. He called it Helluland in Norse language or flat rocks. Heading south they came across green vegetation and forests. They sailed further south and docked on an island. They camped on the island he called Vinland, translated Wineland in English.

The island was rich in fruits, wild game and plenty of fodder for the few animals they sailed with. As winter was approaching, Erikson and his men waited on the island until the winter passed. They set sail of Greenland the following spring. The crew carried all they could bring from the island, from fruits, wild game meat, vegetables, to plants.

When they arrived in Greenland, Leif Erikson and his men became instant heroes. Even with his new found status as a hero, Ericson never went back to the new land. But his epic journey inspired other Norse men to voyage to the new land. Subsequent expeditions were headed by his brother Thorvald.

Due to constant hostilities between the visiting Norse explorers and the native inhabitant of the new land, European settlements were not viable in the area. Eriksson’s sister and her party of settlers were killed by the hostile natives. It was only after Christopher Columbus sailed to the Americas more than four centuries later, that any lasting colonial settlement was built.

It is clear why Leif Erikson never went back to his new land. But some say he was prevailed upon by his father as he was the heir apparent to the chieftaincy. He continued with his evangelism to the people of Greenland, building many churches. Ironically Eric the Red never converted to Christianity. Erikson ascended to the chief throne after his father died. Thus he became the first Christian ruler of Greenland.

Apart from his son Thorkel, nothing more is known about his family. There is no mentioning of his wife in any of the folk tales.

Leif Erikson presumably died around 1020. This was the time his son became the chief leader of Greenland. Many people disputed the Leif Erikson legend. It was until some archaeological discoveries north of Canada that the idea was bought. The settlement had artifacts similar to those of medieval Nordic life. This made historians say it was the first European settlement on the American continent.

Today Erikson is celebrated in the US and throughout the Nordic countries. Leif Day is celebrated in America on every 9th of October. Several monuments and statues have been erected to commemorate Ericsson in countries like Greenland, Iceland, Norway, and Denmark.