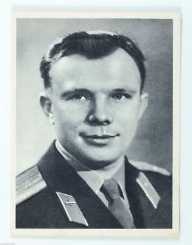 Yuri Gagarin was born on March 9th, in 1934. He earned his fame for being the first man to take on a journey to space. On April 12th, 1961, Vostok spacecraft made a complete orbit of the earth making Gagarin famous.

Yuri Gagarin was born Yuri Alekseyevich Gagarin on March 9th, in 1934. His place of birth was in a village called Klushino in Russia. He was the son of Alexey Ivanovich and Anna Timofeyevna Gagarina.

Yuri Gagarin studied in a technical school until 1955 where he graduated and was immediately drafted into the Soviet Army. Later, he was sent to a pilot school named First Chkalov Air Force.

This school was situated in Orenburg. In 1957, Gagarin took on a solo mission where he flew the MiG-15. After that, upon his graduation, he was commissioned to operate at the Luostari airbase. Months later, in November,

Yuri Gagarin was promoted to become a Lieutenant. Subsequently, he became a Senior Lieutenant on November 6th, 1959.

On April 12th, 1961 Yuri Gagarin flew the Vostok 3KA-3 spacecraft into space making him the first man to travel into space. The spacecraft had been launched from Baikonur Cosmodrome airbase in Southern Kazakhstan.

This trip to space earned Yuri Gagarin high acclaim for he not only travelled to space but he also orbited the earth. He was a national hero.

After his return from space, Gagarin made many trips to different nations such as Germany, Italy, Brazil, Egypt, and Canada. His main idea was to enhance the Soviet Union’s achievement of taking the first man into space.

Yuri Gagarin's sudden rise to fame posed a significant threat to his own life. After his heroic achievement, he mostly wined and dined with people from high social statuses. Therefore, he was expected to drink.

This is what placed him in a difficult situation with his drinking problem. As a matter of fact, it caused serious challenges to his marriage affair as he was often caught with another woman.

Yuri Gagarin passed away on March 27th, in 1968. His cause of death was as a result of a jet crash while he was flying with Vladimir Seryogin, his instructor.

Both their bodies were cremated. Yuri Gagarin left his wife named Valentina and their two daughters.