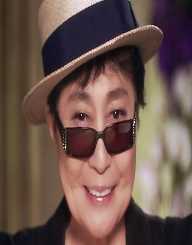 Yoko Ono was born on February 18th, 1933. She is a renowned Japanese multimedia artist, singer, songwriter. She is also a peace activist and that she also gained her fame through her role in filmmaking as well as performing arts. In 1966, she had hosted an exhibition when John Lennon (from Beatles) met her. In March 1969, the two got married. From this point, they worked together in her artistic projects as well as their music careers. In 1980, Lennon was shot after which Ono remained active in her artistic career. In memory of Lennon, Ono went ahead to initiated Lennon Ono Grant.

Yoko Ono was born in Tokyo and was the daughter of Isoko Ono and Eisuke Ono. Her father was a banker by profession while her mother was a former pianist. Ono is the eldest in a family of three. When she was born, the Onos were considered wealthy as the father was ennobled in 1915.

The Ono family moved to San Francisco in 1935 where her father had been posted. They stayed here for two years before they moved back to Japan in 1937. Here, she was admitted to Gakushuin School. Three years later, the family moved again, this time to the New York City. In 1941, they moved back to Hanoi where Yoko Ono got admission to Keimei Gakuen primary school.

After settling with her family for close to six years, they went to Scarsdale, New York. She later joined Sarah Lawrence College. She did not complete her studies as she fled with ToshiIchiyanagi who was her first husband.


Early Career as an Artist

The beginning was tough for Yoko Ono as her works as an artist were not well received and appreciated out there. Things turned around after meeting Anthony Cox. Cox was both a musician and a film producer. Ono began to get recognized for her works of art. Cox later became the second husband to Ono. Ono got both moral and financial help from her husband in making her career success. Together, in 1963, the two lovebirds had one daughter Kyoko Cox.

“Cut Piece” was one of Ono’s works that was well received in 1964. Her significant actions were also repeated in other places such as London and Manhattan. At this point, he was a role model to many in art.

In 1966, while Yoko Ono was at her exhibition preview in London, she met with John Lennon from the Beatles. Lennon was quite impressed with her unique works of art. 18 months later, the two were having an affair. This made Lennon divorce his wife, Cynthia. After this, Yoko Ono and John Lennon got married in 1969.

Ono and her new husband Lennon were not only lovers, but they also worked together on some projects. They went to release their first album ‘Unfinished Music No. 1: Two Virgins’. Other albums that came after this include ‘The Wedding Album’ and ‘Unfinished Music No. 2: Life with the Lions’.

Issues arose after Yoko Ono got married to her new husband, Lennon. Gaining custody over Kyoko, her first daughter was a big issue. It is from here that she went to dedicate a song to her "Don't Worry Kyoko." Her ex-husband disappeared with Kyoko in 1971. Sources claim that he had enrolled her in a cult.

In 1975, Yoko Ono and Lennon got their first son and named him Sean Lennon. After the birth of their son, Lennon opted to quit the music industry and raise their kid. Years later in 1980 when he aspired to return to the music business, he was shot by an angry fan.

After the death of her husband, Ono did not stop her career. She went on to record albums and performing in concert tours. In memory of her loving husband, she had initiated some projects including the LennonOno Grant for Peace. She instated this plan in October 2002. This was done commemorating Lennon’s 62nd birthday that was to be celebrated in the same year. To show their family commitment to promoting peace, she also uncovered the Imagine Peace Tower in Iceland.

Today, Yoko Ono is still breaking records in the music industry. In 2011, she hit the dance charts by getting to number 1. Her major hit (“Move on Fast”) came when she was 78 years old.