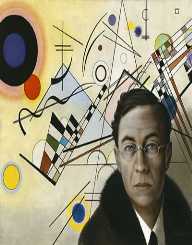 Russian artist Wassily Kandinsky was born on December 16, 1866, in Moscow. He is credited with being one of the originators of modern art and abstract painting. He was five years old when the family relocated to Odessa. An artistic and musical child, he used to play the piano and cello, draw and write poems. The family was well traveled, and as a young person, he was exposed to the architecture and atmosphere of many different cities in Europe. He spent time as a student studying the area of Vologda in Russia and the folk art and architecture left a lasting impression.

Wassily Kandinsky studied economics and law at the University of Moscow (1886-1892). After graduation, he lectured in law at the University until 1896. By then he had decided to be an artist, and he moved to Munich to study art under Anton Azbe (1897-1899) and at the Kunstakademie Franz von Stuck (1900).

His decision to study art came about after he visited an exhibition of the French Impressionists in Moscow. Claude Monet’s work, in particular, influenced his decision.

From 1901 until 1903 Wassily Kandinsky taught at the art school of the Phalanx in Munich, a group he co-founded. In 1902, he had his first exhibition at the Berlin Secession, showing woodcuts.

During 1903 and 1904 he traveled to Italy, the Netherlands, North Africa and Russia and in 1904, he had an exhibition at the Salon d'Automne in Paris, France.

The Neue Künstlervereinigung München (NKVM) elected Wassily Kandinsky their inaugural president in 1901, and the group’s first exhibition took place in Munich in 1909 at the Heinrich Thannhauser Moderne Galerie. Around 1910, he had started abstract watercolor paintings. In 1911, Wassily Kandinsky and Franz Marc were working on Der Blaue Reiter Almanac, and in 1912 it was published. Along with Marc, Kandinsky withdrew from the NKVM and held the Blaue Reiter’s first exhibition at the Moderne Galerie. A second exhibition was held in 1912 at the Galerie Hans Goltz in Munich.

Wassily Kandinsky held his first solo exhibition in 1912 at Der Sturm gallery in Berlin, and in 1913 one of his works was included in the Armory Show in New York.

At the outbreak of WW1 Wassily Kandinsky returned to Moscow working at the People's Commissariat of Education. By 1922 he was back in Germany where he started teaching at the Bauhaus in Weimar. His first solo show in New York by the Société Anonyme took place in 1923. In 1924, Blaue Vier was formed with Paul Klee, Lyonel Feininger, Alexej Jawlensky, and Kandinsky. The art he produced between 1920-1924 is known as his architectural period.

He moved to Dessau in 1925, becoming a German citizen in 1928 but after the Nazi government closed the Bauhaus in 1933, Wassily Kandinsky settled in Neuilly-sur-Seine, France. Between 1927 and 1933, his paintings used softer colors and this period is known as his romantic period, which led to his final phase which was a mix of all his previous phases.

After Nazi officials had confiscated a large number of artworks that they considered degenerate, some Kandinsky’s paintings were burned in Berlin in 1937.

Wassily Kandinsky became a naturalized French citizen and in 1939 and died on the 3 December 1944 in Neuilly-sur-Seine.

One of Vassily Kandinsky’s most famous works is Der Blaue Reiter (The Blue Rider) produced in 1903. This is from his pre-abstract period and depicts a speeding horse racing through a meadow carrying what looks like a child. His First Abstract Watercolor was painted between 1910 and 1913. Art historians recognize this as the first purely abstract painting. Farbustudie Quadrate (1913) show focuses on strong colors with a concentric circle and is famous for depicting the emotions that colors can elicit. Composition VII (1913) is considered a highlight of his career.

Wassily Kandinsky’s first wife was Anna Chimyankina, a cousin. She was one of the first female students at Moscow University. When he changed careers and opted to study art, she went with him to Munich. They separated seven years later and divorced in 2011. He met his second partner artist Gabriele Munter in 1901. She was a student of his, and when he separated from his wife, they started living together, although they were never married. At the outbreak of WWI, Wassily Kandinsky left Germany and ended his relationship with Munter.

Wassily Kandinsky met Nina Nikolayevna in 1916, and they got married in 1917. She was twenty-five years his junior and outlived him by 39 years. After Kandinsky’s death in 1944, Nikolayevna inherited his estate, and she used part of it to set up the Kandinsky Fund for the preservation of his art. She also contributed substantially to the George Pompidou Centre in Paris, France. She did not remarry, and in 1983 she was murdered in her home in Switzerland.