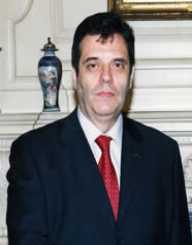 Vojislav Koštunica was born on the 24 March 1944 in Belgrade, in what was then communist Yugoslavia.

After graduating from the Second Belgrade High School (1962), Vojislav Koštunica studied at the University of Belgrade and obtained a law degree (1966). He got an MA (1970) and was awarded a doctorate in 1974. While studying for his doctorate, he worked as an assistant at the university (1970-1974) but was forced to leave because of his political views. He had criticised the communist government headed by Tito in what was then Yugoslavia. What he did was question the reshaping of the Yugoslav constitution that Tito had put forward.

After leaving the university, Vojislav Koštunica worked at the Institute of Social Sciences (1974-1981), then moved to the Institute for Philosophy and Social Theory (1981). During the 1980s, he focused on human rights issues.

In 1989, Vojislav Koštunica was a founding member of the Democratic Party. He parted ways with the party in 1992 and founded the Democratic Party of Serbia. In 2000, he ran for president against Slobodan Miloševi? and gained 50.25 % in the first round vote. Miloševi? insisted that Kostunica had only received 49% and this resulted in protests and strikes. Eventually, Miloševi? stood down as president and Kostunica took over as president of Serbia (2000-2003).

Vojislav Koštunica has never married and has no children.