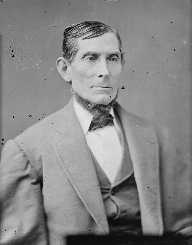 From a humble background, Thomas Hendricks rose to become the 21st Vice President of America. He was a prominent politician for the Democratic Party and a lawyer. He also served in the U.S. Senate and was a leading political figure during the civil war. Unfortunately, he couldn’t contribute much to the American Politics after becoming the Vice President. His ill health ended his life only months after he took office.

Thomas Andrew Hendricks was the son of a farmer. He was born on September 7, 1819, in Muskingum County, Ohio, United States.  His star sign was Virgo. His father John Thomson Hendricks was also involved in politics. This instilled in young Thomas an interest towards politics which he continued throughout his life. He had seven siblings. Thomas grew up in Shelby County, Indiana where the family had relocated to, one year after his birth.

As a child, Thomas Hendricks went to the Shelby County Seminary. He then attended the Greensburg Academy.  Hendricks graduated from the Hanover College, Indiana in 1841. He went to a law school in Chambersburg, Pennsylvania. He joined the Indiana bar council in 1843 and began practicing as a lawyer in 1843.

From 1843 to 1848, Thomas Hendricks continued to work as a lawyer with a keen interest in politics. His turn came when he became a member of the Indiana House of Representatives and served as the speaker of the house. Two years later, he became a member of the U.S. House of Representatives from Indiana’s 5th district. He was appointed the chairman of the Committee on Mileage in 30-second Congress. He also served on the Committee on Invalid Pensions from 1853 to 1855.

Thomas Hendricks became the Commissioner of the General Land Office in Washington D.C. in 1855. He also ran for the post of governor in 1860, but his campaign wasn’t successful. He took a break from active politics in 1868 and practiced as a lawyer for the next four years.

Hendricks became the first Democrat governor of Indiana, in 1872. The term was a rocky one, and he had to face opposition from the Republican majority.  He had extreme difficulty in getting new legislations passed during this period. One of his most important contributions as the governor of Indiana was to introduce the construction of a new statehouse. The building is still in use.

Thomas Hendricks was a candidate for the 1876 Vice-Presidential elections but lost. Eight years later, in 1884, he was elected as the 21st Vice President of the United States. However, due to poor health, he died only months later.

Thomas Hendricks died in his sleep. He was 66 years old at the time of his death on November 25, 1885. He was serving as the Vice President of the U.S. and had been suffering from poor health.