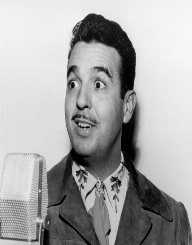 Tennessee Ernie Ford was born on February 13th, 1919. His place of birth was in Bristol, Tennessee. He earned his fame for being a recording artist and a TV host who rose to stardom for his exceptional singing prowess. He served in the World War II and later went on to work as a radio presenter in Pasadena, CA. This paved the way for his first recording contract. Within a short period, Ernie Ford earned nationwide recognition for hit songs such as "Sixteen Tons" and "The Shotgun Boogie."

At the time of his birth, Tennessee Ernie Ford was given the name Ernest Jennings Ford. He was born on February 13th, 1919. His parents were Clarence Thomas Ford and Maud Long. Growing up in Bristol, Ford also pursued his radio personality from the same place. However, he moved to a different location in 1939 to study music at the Cincinnati Conservatory of Music. He later served in World War II as a 1st Lieutenant. After the war came to an end, he moved to Pasadena in California where he worked as a radio presenter. During this time, he announced a country music show that led to the development of the character "Tennessee Ernie." He ventured into recording, and within no time, he released "The Bonnie Blue Flag."

A recording contract came to Ford’s doorstep after one of Capitol Records’ scouts heard his work. He did not stop working on his radio career, but he honed his singing skills too. With time, his signature song was the hit song "Sixteen Tons." Country music celebrity Merle Travis had recorded this song. Tennessee Ernie Ford also rose to the spotlight after hosting his show called The Ford Show from 1956 to 1961. This show was aired on NBC. His catchy phrase that he used in the show was "Bless your pea-pickin' heart!," which earned him the epithet "The Ol' Pea-Picker." Around this period, he also began recording gospel songs and released his debut album in 1956 titled Hymns.

Tennessee Ernie Ford earned himself three spots at the Hollywood Walk of Fame. One spot was for his remarkable contribution to the radio industry. The other two were for his recording and TV personality. In 1984, he was bestowed with the Presidential Medal of Freedom. Six years later, he was listed as part of the Country Music Hall of Fame.

Ford’s success grew beyond what he had imagined for himself. Nonetheless, he suffered from alcohol addiction which contributed to his deteriorating health when he grew older. He tied the knot with Betty Heminger in 1942. The relationship lasted until the time Betty died in 1989. The couple had two sons in their marriage, i.e., Jeffrey Buckner and Brion Leonard Ford. After the death of his first wife, Ford got married for the second time to Beverly Wood in June 1989.

Tennessee Ernie Ford passed away on October 17th, in 1991. His death came after he had dined with President George H.W. Bush. He passed away at the age of 72.