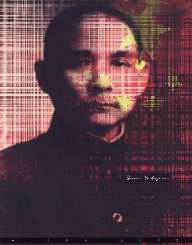 Sun Yat-sen was a Chinese politician, revolutionary, writer, calligrapher, and a physician. Born on November 12, 1866, he was a founding father of the Republic of China and the first president of that country. Sun Yat-sen served as the Provisional President of the country after its founding in 1912 but bowed out after unending pressure from Beiyang Clique. Sun Yat-sen is known as the Father of the Nation in the Republic of China, Hong Kong and Macau for his role as a leading pioneer of the country.

Sun Yat-sen is also the "forerunner of democratic revolution" from the People’s Republic of China. Sun Yat-sen was a major figure in the ousting of the Qing dynasty prior to the Xinhai Revolution. Sun was a co-founder and first leader of the National Party of China. After stepping down as president, his political life was characterized by frequent exiles and struggle. Sun Yat-sen was known for his political philosophy termed, the Three Principles of the People, which includes nationalism, democracy, and the people livelihood.

Sun Yat-sen was born on November 12, 1866, in Cuiheng, Xiangshan Count in the Guangdong Province. He was born to Sun Dacheng and Lady Yang. He left for Honolulu in the Kingdom of Hawaii to leave with his elder brother Sun Yat-sen Mei after his primary education. While there, Sun Yat-sen attended Iolani School where he studied English, Christianity, British history, science, and mathematics. His fast learning of the English language gained him an award from King David Kalakaua for outstanding achievement. In 1882, Sun Yat-sen graduated from Iolani and enrolled at the Oahu College, currently the Punahou School for a semester. With the fair that Sun would embrace the Christian faith, Sun Mei sent him back to China in 1883.

After his return, Sun Yat-sen met his childhood friend Lu Haodong at Beijidian, a temple in Cuiheng Village. The two had to move toHong Kong to escape the wrath of the villagers after breaking the Beiji Emperor God villagers worshipped. He attended the Diocesan Boys’ School and later The Government Central School from 1884 to 1886. He then studied medicine at the Christian missionary John G. Kerr at Guangzhou Boji Hospital. In 1892, Sun Yat-sen earned his license from the Hong Kong College of Medicine for Chinese to practice medicine.

Sun Yat-sen quitted his medical practice to focus on revolutionary activities aimed at transforming China. Sun Yat-sen was particular frustrated about the Qing government’s entrenched position not to adopt technological knowledge of the advanced Western countries. Sun Yat-sen had joined the Four Bandits, a group of revolutionary thinkers during his days at the Hong Kong College of Medicine for Chinese in1888, the time of the Qing Dynasty rebellion. To official present his idea of change and modernizing China to the Qing government, Sun Yat-sen wrote a petition to Qing Viceroy Li Honzghng but was not granted the audience even after his travel to Tianjin. To drew him towards the revolutionary idea.

Sun Yat-sen then left for Hawaii where he founded the Revive China Society with the member being Chinese expatriates. In 1894, a chapter of the group in Hong Kong merged with the Furen Liberty Society also a revolutionary group. The founder of Furen, Yeung Ku-wan became the president while Sun Yat-sen served as the secretary. To prevent being identified, activities of the group were disguised as a form of business with the name Kuen Hang Club.

After two years of its establishment, the Revive China Society planned to launch the First Guangzhou uprising against the Qing government on October 26, 1895. The uprising was. However, a failure since plans of it was leaked, and about 70 members, including Lu Haodang, were captured. Sun’s brother Mei sold about 12,000 acres of his ranch and cattle in Hawaii so support activities of the group. After the failed uprising, Sun went into exile in Japan where he made friends with a democratic revolutionary Miyazaki Toten who also supported him financially.

Sun Yat-sen was also a friend of Mariano Ponce, a diplomat of the First Philippine Republic. Sun proceeded with another uprising, the Huizhou uprising in the attack of Huizhou and provincial authorities in Guangdong on October 22, 1900. Once again the uprising was a failure. This sent him back into exile and lived in countries like the United States, Canada, and Europe. He also used the period to raise funds for his revolutionary activities. The Chinese Imperial secret service planned to assassinate him after his arrest by the Chinese Legation in London in 1896. However, campaigns by The Times, The Globe, James Cantlie and the Foreign helped in his release after 12 days.

Sun Yat-sen continued to galvanize support for his activities with the sole aim of ousting the Manchu to establish a Republic. Sun Yat-sen coined the Three Principles of the Peoples being his political philosophy. These include nationalism, democracy, and welfare of the people. Sun Yat-sen sought to distribute land equally among the people. Sun Yat-sen and the revolutionary Chinese students studying in Tokyo and Japan joined forces to form the Tongmenghui (United League), on August 20, 1905. Sun Yat-sen gained the support of several other groups and people, which led to the Zhennanguan uprising at the Friendship Pass on December 1, 1907. This time too, it failed after seven days of fighting. Other uprisings in Huanggang, Huizhou seven women lake uprising and the Quizhou uprising all failed that year. The group initiated the Qin-Lian uprising and Hekou uprising in 1908, which also failed. The failed uprising caused some fracas in the group with some questioning the capabilities of Sun. The group was then divided into the anti-Sun and pro-Sun members.

Sun Yat-sen later went into exile in the United States, and the group was led by Huang Xing. Huang Xing led a failed uprising in Guangzhou called the Yellow Flower Mound revolt on April 27, 1911, leading to the death of many revolutionaries with only 72 bodies found. Huang Xing never gave up and led another one on October 10, 1911, at Wuchang, and this time it was successful. The uprising ended the over 2000 years of imperial rule in China. Upon hearing the successful, revolt, Sun Yat-sen returned to China in December.

After the successful uprising and the overthrow of the Qing government, Sun Yat-sen was appointed the provisional president on December 29, 1911, at a meeting of representatives from provinces in Nanking. Li Yuanhong was also appointed the provisional vice-president Huang Xing, minister of the army. Sun Yat-sen stepped down in 1912 for Yuan Shikai to take over as the new provisional president. There was a consensus that is Yuan who was then in charge of the Beiyang army helped to oust the Qing court; Sun Yat-sen would become the president. He fulfilled that in getting Emperor Puyi abdicate his throne on February 12, 1912, hence his takeover as president.