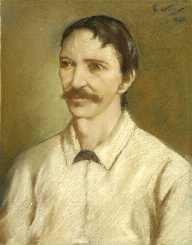 Scottish novelist Robert Louis Balfour Stevenson was born on November 13, 1850, in Edinburg. His father was a lighthouse designer, and Stevenson enrolled at Edinburg University to follow his father’s footsteps. Still, this profession never appealed to Stevenson, and he began studying law instead.

While studying, Stevenson spent his summer vacations traveling to France. He often met young painters and writers. This inspired Stevenson to begin his career in writing. In 1875 he graduated with a law degree, but never practiced as a professional.

Robert Stevenson’s first published book was An Inland Voyage. The book tells a story of his voyage from Antwerp to northern France in canoe via the Oise river. The following year, in 1879, he continued his story in the book Travels with a Donkey in the Cevennes.

Robert Stevenson continued his works with a collection of humorous essays Virginibus Puerisque and Other Papers. These essays were originally published in various magazines. In 1882, Stevenson wrote his first short fiction book New Arabian Nights.

In 1976, Stevenson met his future wife, Fanny Osbourne. She was American and had two children from her previous marriage. Osbourne and her first husband divorced in 1878. After this, Stevenson went to California to meet her and married in 1880. The couple had their honeymoon at an abandoned silver mine in Napa Valley. This was an inspiration to Stevenson’s 1883 book The Silverado Squatters.

Robert Stevenson had long-standing health issues, and in the 1880s, his health further declined. He was most likely suffering from tuberculosis since he had lung hemorrhages. Stevenson was confined to bed; therefore writing was one of the few things he could do. During this time, Stevenson wrote his most famous fiction stories- Treasure Island, The Black Arrow and Kidnapped.

Stevenson got the idea of Treasure Island from his 12 -year-old stepson. The boy had drawn a map and showed it to Stevenson. He conjured the drawing with pirate adventure story and published it as series in the boy’s magazine Young Folks. In 1883, Treasure Island was released as a book. This publication made Stevenson widely famous. By the end of the 1880s, Treasure Island was the periods most popular and widely read book.

His reputation was further benefited by his 1886 book Strange Case of Dr. Jekyll and Mr. Hyde. The book was an immediate success. The book was internationally known and inspired more than 100 motion pictures and many stage productions.

After his success, Stevenson and his family decided to sail from San Francisco to Pacific Ocean islands. The family left the United States in June 1888. They made stops at the Hawaiian Islands and in 1889 arrived in the Samoan Islands.

Stevenson decided to settle in Samoan islands and build a house. The island life was a big inspiration to Stevenson. During his time there he wrote several works about Pacific isles, including 1892’s The Wrecker, followed by Island Night’s Entertainments and In the South Seas.

His last works are known to be his mature and best works in the literary world. He wrote both fiction and non-fiction at the time. While critics praised his writing style, readers loved his storytelling skills. Stevenson died in 1894 from a stroke, at his home in Samoa and was buried on the top of Mount Vaea.