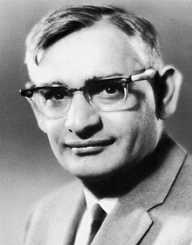 Prasanta Chandra Mahalanobis was born in 1893 in Bikrampur (Bangladesh). He was born in a family that moved to Calcutta in 1854. His father was Prabodh Chandra.

Prasanta Chandra Mahalanobis grew up in a well-situated and socially active family.

His first school was a Brahmo Boys School. He graduated this school in Calcutta in 1908. Afterwards, he enrolled in the Presidency College, where he was tutored by very high-ranked teachers.

Some of them include Jagadish Chandra Bose, Prafulla Chandra Ray, and others. Prasanta Chandra Mahalanobis graduated in 1912 with a bachelor degree in Science and honors in physics. A year later he moved to England. There he enrolled the University of London in 1913.

After arrival in England, due to an unfortunate turn of events, Prasanta Chandra Mahalanobis missed the train to London and stayed at a friend in King’s College in Cambridge. His friend then proposed Prasanta Chandra Mahalanobis to stay in Cambridge. He agreed. Studies went well, as well as the new hobbies of cross-country walking and punting on the river.

In England, Mahalanobis first encountered the journal “Biometrika.” This journal raised considerable interest, and he purchased the full set of those journals and took them with him to India. Through these journals, Mahalanobis discovered the statistical problems in fields of meteorology, anthropology, and others.

Upon returning to Calcutta, Prasanta Chandra Mahalanobis was introduced to Nirmal Kumari. She was an educationist from the Brahmo Samaj. Even though her father was not entirely supportive, they both married in 1923. The reason for her father’s disapproval was the fact that Mahalanobis was not accepting some clauses of the Brahmo Samaj, such as prohibited alcohol intake and smoking. The father, therefore, did not attend the wedding.

Prasanta Chandra Mahalanobis together with some colleagues founded the Indian Statistical Institute in 1931. The colleagues were Pramatha Nath Banerji, Nikhil Ranjan Sen, and Sir R. N. Mukherji. Officially the institute was registered in 1932 as a non-profit society. The Institute gained many followers. A year after the foundation, they started publishing a journal “Sankhya” alongside the already existing journal Biometrika.

The institute functioned well and attracted more scientists. It expanded over time until was declared of national importance in 1959. Indian Statistical Institute (ISI) also gained the status of a deemed university the same year.

In 1920, Prasanta Chandra Mahalanobis met the director of Zoological Survey of India, Annandale. Annandale proposed Mahalanobis to analyze anthropometrical measurements of Anglo-Indians in India. Keeping in mind the new statistical problems he read in the Biometrika journal, he decided to evaluate the issues of European-Indian marriages. The question of particular interest was if the Indian party came from a specific caste.

After evaluating the data, he concluded that more often Indians from higher castes marry Europeans. These results were published in 1922. This research helped him develop methods to compare and group populations with a multivariate distance measure. This measure is nowadays known as “Mahalanobis distance.”

Prasanta Chandra Mahalanobis led many surveys in the years 1937-1944. Some of them contained such trivial topics as tea-drinking habits, and some were more detail-oriented, for example, about plant diseases. He created the terms “pilot surveys” and explained how useful sampling methods are. His work was a breakthrough in agricultural research in later life.

Later, Prasanta Chandra Mahalanobis participated in developing India’s five-year plans. He succeeded to use his Mahalanobis model in the Second Five Year Plan which contributed to the extensive industrialization of the country.

Interestingly, Mahalanobis also worked as a secretary for Rabindranath Tagore, and later for a short period worked at Visva-Bharati University.

The government of India presented an award to Prasanta Chandra Mahalanobis for his investment in the development of science in India.

Prasanta Chandra Mahalanobis passed away at the age of 79 in 1972, while still doing research and leading the Indian Statistical Institute.