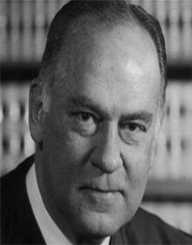 Potter Stewart was born on January 23, 1915. He was an associate of the Supreme Court of the United States of America. He died on December 7, 1985, at the age of seventy. He is hailed for the criminal justice reforms that he contributed to. He is also praised for pushing the Fourth Amendment jurisprudence.

Potter Stewart was born on January 23, 1915, in Jackson in the United States of America. He was born to James Garfield Stewart who was a lawyer and Harriet Loomis Potter. His father was a well known Republican who once served as the Cincinnati mayor. Peter attended Hotchkiss School. In 1933, he graduated from the school.

Potter Stewart later joined Yale University where he studied law. At the university, he was the chairperson of the Yale Daily News. In 1941, he graduated from the university with a Law Degree. He edited the ‘Yale Law Journal.’ He was a member of the Phi Delta Phi fraternity while in school.

After his graduation, Potter Stewart worked with a law firm on Wall Street for some time. He later joined the United States Naval Reserve during World War 2. While in the Navy, he became a lieutenant junior. After leaving the Navy, he worked at Dinsmore & Shohl located in Cincinnati. In the 1950s, he served in the Cincinnati City Council two times.

In 1954, he was appointed to the United States Court of Appeal’s Sixth Circuit. In 1959, he was nominated by President Dwight Eisenhower to the Supreme Court. While at the Supreme Court, he chose not to take any sides, so he was neither a liberal nor a conservative.

During his tenure at the Supreme Court, he gave dissenting opinions in cases such as Engel Versus Vitale, Miranda Versus Arizona, and Irvin Versus Dowd among others.

Potter was a firm and moderate person when it came to pragmatic views. He was the only dissenting judge in the case of Re Gault which extended to juveniles who were found guilty of crimes, the same legal rights afforded to adults in the Miranda Versus Arizona case.

Potter Stewart did compromise his views, and so he was most of the time not in agreement with other members of the bench. He judged numerous cases that brought changes to the United States Legal System. In 1981, he retired from the Supreme Court.

Later on, he was cast in a series that was about the United States Constitution. Potter will be remembered as a judge who contributed a lot to the criminal justice and civil rights cases.

In 1943, Potter Stewart married Mary Ann Bertles with whom he had three children, that is, Harriet, David and Potter Junior. He grew up alongside his brother Zeph Stewart. Potter subscribed to the Episcopalian religion.

He was a grandfather to several grandchildren. Potter died on December 7, 1985, in Hanover after suffering from a stroke. His sun sign was Aquarius. It is said that he is the source for Bob Woodward’s nonfiction ‘The Brethren.’