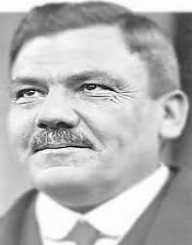 Plutarco Elías Calles was a Mexican politician and military leader whose name came to limelight when his administration paved the way for Mexico's political stability in later years.

In 1879, Plutarco Elías Calles married Natalia Chacón of which their union brought forth 12 children. The names of their children were Rodolfo, Plutarco "Aco," Bernardina, Natalia, Hortensia "Tencha," Ernestina "Tina," Elodia, María Josefina, Alicia, Alfredo, Artemisa, and Gustavo respectively. Three of their children died during infancy, namely Bernardina, Elodia, and María Josefina. His marriage to Chacón ended after 48 years when she died in 1927.

Shortly after, he remarried for a second time to Leonor Llorente. However, his marriage to Llorente was short-lived as well. Llorente died from suffering a brain tumor at the age of 29 in 1932.


The Birth of a Cynic

Born on September 25, 1877, in Guaymas, Sonora, Mexico as Francisco PlutarcoElíasCampuzano, he was the son of an alcoholic father named PlutarcoElías Lucero and MaríaJesúsCampuzano Noriega. His father was an alcoholic and died fighting in the French Intervention back in 1865. His mother too died which left him in the care of his uncle, Juan Bautista Calles, which he adopted the surname Calles from. Juan Calles worked as a schoolteacher upfront but did small-scale dealing involving alcohol and groceries and was also an atheist.

Growing up under his uncle's care, Juan Calles passed on to him the attitude of disdain for the Catholic Church, which showed in his later years.

Plutarco Elías Calles worked several jobs varying from bartending to being a school teacher. He jumped at any given political involvement thrown his way. He got his chance when he aligned himself as a supporter of future police commissioner Francisco I. Madero.

He also stood alongside Venustiano Carranza who triumphed the Mexican Revolution. By 1915, Calles attained the rank of general and led the Constitutional Army.

He was also appointed as the governor of Sonora by 1915 of which his administration was defined as one of the most reformed and promoted the economic growth of Mexico's infrastructure. He implemented ideas regarding agrarian reform, anticlericalism, and educational progress. In 1919, he visited Mexico city and was appointed as the government of Carranza's secretary of industry, labor, and commerce and aligned with Alvaro Obregón who was running for president at the time.

Obregón eventually won the seat of presidency and was even chosen by Obregón himself as his successor.

Calles at the Seat of Presidency

While Obregónwas president, Plutarco Elías Calles himself served as one of his cabinet members until he was appointed next in line. He served as the president from 1924 until 1928. Under his administration, he gave significance to education by establishing schools and agrarian reform and the construction and rehabilitation of railroads passages that were destroyed during the civil war. During this time, the conflict between the Church and State was at its peak and was even dubbed as “JefeMáximo” or the most powerful chief, long before he sat at the president’s seat.

In 1926, the brewing animosity between the church and state finally broke out when the enforcement initiated violence and was reciprocated by a group of peasants who called themselves “Cristeros.” The Cristeros claimed and took arms in the areas of Jalisco, Colima, and Michoacán. In retaliation, the local militia began victimizing innocent Roman Catholics that purged the lives of several civilians.

A few years later in 1930, Plutarco Elías Calles' agrarian reform turned out to be a flat-out failure, and he found himself surrounded by numerous oppositions, including his protégé Lázaro Cárdenas. He found himself at the opposing side of Cárdenas by 1935 but lost the contest which led to his exile a year later in 1936.

Plutarco Elías Calles' exile from Mexico was finally lifted when President Manuel Avila Camacho lifted the ban, therefore allowing him to return to his homeland. Already suffering from deteriorating health, he spent the remainder of his days Cuernavaca and Mexico of which he developed an interest in Spiritualism in his final days. He died at the age of 68 on October 19, 1945.