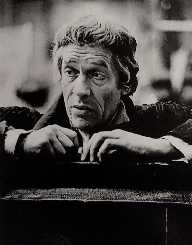 British actor Paul Schofield was born David Paul Schofield on the 21 January 1922 in Birmingham, England. His parents were Edward and Mary Scofield. Shortly after his birth, the family moved to Hurstpierpoint when his father was appointed head of the local infant school.

He was a pupil at Varndean School in Brighton, England and it was there that he was first exposed to acting in the plays of Shakespeare. He left school at 17 and shortly afterward joined the Croydon Repertory Theatre where he commenced training as an actor. After the Croydon school closed down, Scofield relocated to London where he joined the London Mask Theatre. One of his teachers was Eileen Thorndike, the sister of the actress Sybil Thorndike. During World War II, when two of the teachers evacuated to Devon, Scofield joined them. Scofield had failed the British Army medical examination due to having overriding toes which prevented him from wearing army boots and therefore did not join the British Army during World War II.

Scofield performances as he toured the country brought him to the attention of critics when he was still in his teens. As even at that early age, his voice and stage presence allowed him to take on stage roles written for a much more mature actor.

After playing a great variety of stage roles with the Birmingham Repertory Theatre, Schofield moved to the Royal Shakespeare Company in Stratford in 1946. He also worked in radio, mainly for the BBC. Productions he appeared in include Desire Under the Elms at the Westminster Theatre which was met with accolades and enthusiasm by critics. Productions included Pericles Prince of Tyre (1947) and Hamlet (1948) at the Shakespeare Memorial Theatre. And in 1955, he toured the USSR  Hamlet to wide acclaim. Scofield’s work was predominately on stage and radio.

By the mid-1990s, Scofield appeared less frequently on stage. Appearances during this time include Heartbreak House (1992) and his final stage performance: Almeida (2001).

Scofield married Joy Parker in 1943, and they lived in Sussex. They remained married until his death from leukemia in March 2008. The couple had a song and a daughter.