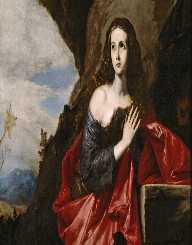 Mary Magdalene is considered one of the most loyal devotees of Christ in the Christian Bible. It is believed that Mary found great favor with Jesus Christ and was very keen at following his teachings after Jesus cast demons out of her. She was named after her local town Magdala. Nothing much is noted in the bible of her childhood or family.

It’s believed that Mary Magdalene was the immoral Jewish woman who washed the feet of Jesus with her tears, dried them with her hair and opened an alabaster box to oil his feet. This is according to the scriptures in John12:3, and John11:1-2. Jesus forgives her sins and tells her that her faith had healed her. Mary is perceived to have been a prostitute because she was a city-bred woman though there is no history that confirms that she was a prostitute. This school of thought has been dismissed as the said prostitute was not mentioned by name in any canonical gospel.

In the book of Luke 8:2, Mary had seven demons cast out of her. This passage confirms her by name, so the promiscuity debate is unfounded. The demon possessed woman could not have been able to attract men for sexual favors. Mary the native of Magdala was a well-known figure who supported Jesus and his disciples well before the anointing scene happened.


A Disciple Of Jesus Christ

The gospels place Mary Magdalene at Golgotha during his crucifixion. She was accompanied by Mary the mother of Jesus. One needs to note that when Jesus was arrested, all his male disciples save for Simeon Peter followed him. Even Peter kept a safe distance. The gospels names Mary Magdalene who was there to witness the painful death of her Lord. Only a true devotee could risk that much.

On the day of resurrection of Jesus, the Bible names Mary Magdalene as one of the women who met the angels at the empty tomb. She was again the first to meet Jesus after his resurrection. Mary Magdalene was the bearer of the good news to the disciples who were holed up in Jerusalem.

During the ascension of Jesus, Mary Magdalene was part of the disciples who gathered to witness the event. The other woman who displayed more courage and discipleship to Jesus was Mary the mother of Jesus.

Like in her early life, the Bible does not record her life after the ascending of Jesus. Theologians believe she followed Mary the mother of Jesus to turkey where the two stayed at the house of John the apostle.

Gnostic gospels are manuscripts believed to have been recorded by some of the early disciples. They were not canonized into the Bible for their lack of spiritual inspiration. In this category are the gospels of Thomas, Philip, Mary, and even Lazarus. In most of the Gnostic gospels, Mary Magdalene is depicted as an immoral woman who seduced and had a sexual relationship with Jesus. In the gospel of Phillip, Mary Magdalene is said to have been the wife of Jesus.

The Roman Catholic Church depicts Mary Magdalene as a repentant sinner. She is the immoral woman whose sins were forgiven after an act of repentance. She has been elevated to the position of a saint in the eyes of the church devotees. Her character is thus to be emulated by all. While encouraging the flock to emulate her character is good, one major point is missed. The real persona of Mary Magdalene was that of the demon-possessed woman and not the sexually immoral.

The controversial debate surrounding Mary Magdalene is shrouded in the early infightings between the western and the eastern churches. When the dispersion of the Christians started in the Asia Minor region, most people had their own versions of the gospels to attract followers in their congregations. As the infighting continued, the original version of the teachings started to be interpreted to suit the congregational needs. Thus the small fragmented churches mushroomed. With this came the misinterpreted versions of the gospels. Some other churches went ahead to embrace the Gnostic gospels and the Apocalyptic teachings.