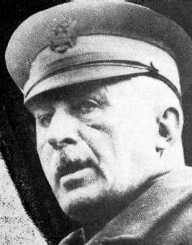 Leonard Wood was born in Winchester, New Hampshire, on October 9, 1860. He was the son of Charles Jewett Wood and Caroline E. Hagar Wood. He was also the descendant of four people who originally came over to America on the Mayflower ship. These four people were named William White, Stephen Hopkins, Francis Cooke, and Richard Warren.

Leonard Wood didn’t start out being a military man. He began his career in an entirely different place, and that was as an army doctor working out on the frontier. Wood got his medical degree in medicine from Harvard in 1884. He did his medical internship at Boston City Hospital.

He received a Medal of Honor during Spanish-American War.

Leonard Wood was in charge of the Rough Riders, which was a regiment of soldiers under the United States Army that was given this nickname. They were initially known as being the 1st United States Volunteer Cavalry. The Rough Rider was one among three regiments that came into being to address the Spanish-American War in 1898. They were also the only regiment that did manage to see any action on the battlefront.

At this specific moment in time, the United States Army was still very small and understaffed in troops, and that was something that did pale in comparison to their status during the American Civil War which was close to thirty years before. President William McKinley recognizing the need for more soldiers did call upon the help of 125,000 volunteers to assist in the war efforts. Thus, came into being the Rough Riders, which was commanded by Leonard Wood.

The Rough Riders weren’t called the Rough Riders at first. They were also known as “Wood’s Weary Walkers,” and that was to honor its first commander. The commander was Colonel Leonard Wood. Theodore Roosevelt was made Colonel Wood’s second-in-command during the Spanish-American War. Colonel Leonard Wood did receive the Medal of Honor for his highly active participation in the Apache Wars. The Apache Wars was a group of armed conflicts that occurred between the United States Army and different Apache nations that did take up arms and fight in the southwest between the years of 1849 and 1886.

Leonard Wood was an energetic soldier that helped to transform the US Army into modern fighting force. Leonard Wood had many unusual facets that made him an extraordinary personage. One of the most important of all things was his sense of adventure and aggressiveness that helped him to mold this military branch of service into what it was meant to become. Though he was originally born to be a doctor like his father, he was destined to go into another line of work, and that line of action was to serve in the military.

Leonard Wood had a love of adventure that encouraged him to take a contract medical position with the Army in 1885. The very first assignment that Wood did get was to go to Fort Huachuca. Fort Huachuca was in Arizona, and the next appointment, which he did have was in the following year. It was the last campaign against Geronimo. In 1898, Wood was recognized for his gallantry and outstanding service as both a physician and line officer. He got a Medal of Honor as a reward.

The reason that Leonard Wood was such a remarkable soldier was that of his doctoring ability. He did serve in numerous medical positions from 1887 to 1898. One of the very last medical spots that he did have was that of personal physician to President William McKinley and his family. War with Spain started to break out in 1898 and Wood immediately sought out a line command for himself. He was then given the role of leadership of the Rough Riders or the 1st Volunteer Calvary as they were officially known by the military.

General Wood was always there for his men. He led them bravely at Las Guasimas and San Juan Hill. For the remainder of the war, he ended up leading the 2nd Calvary Brigade, and when the hostilities did cease, he stood in Cuba and became the Military Governor there from 1900 to 1902. In the position of Military Governor in Cuba, he was able to put into place, some fundamental changes that were political, educational, and social reforms in the description. What he also did for the island of Cuba was to make a lot of other significant improvements as well. Some of these improvements had to do with the medical and sanitary conditions that were significantly improved because of his efforts.

Some of these leadership positions were that of the commander of the Philippines Division and the leader of the Department of the East. He was also the only medical officer on record to ever be offered the Chief of Staff position in the Army and to hold that position. In the Chief of Staff position, Wood was genuinely able to make a whole lot of outstanding contributions, which would be beneficial to both the Army and the Nation.

Not only was Leonard Wood able to strengthen the General Staff, but he was also able to establish the Chief of Staff as being the senior officer for the Army. What was also lessened by Wood’s presence was the influence that did go along with the old bureau system that has stopped many military reforms from ever taking place. Some of the other things that Wood did do was to develop the Maneuver Division and the idea of the Mobile Army as well. Because of the changes that Wood had inspired, the US Army was able to do amazing things, and one of them was to combine its arms divisions for the very first time in its history as a military outfit.

After World War I, Leonard Wood was made a Republican candidate for the Presidential nomination, but somehow or other the Republican Convention got deadlocked. The party ended up choosing another compromise candidate whose name was no different than Warren Harding. Warren Harding did win the Presidential election in 1920. Leonard Wood retired from military service in 1921 and accepted the post of Governor-General in the Philippines from 1921 to 1927.