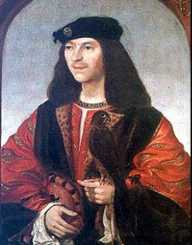 King James IV of Scotland was an efficient ruler of the Kingdom of Scotland, under whose reign the country flourished into a supreme political power toward the end of the 15th century. He is regarded as the most successful monarch from the House of Stuart. Although peace prevailed initially between the kingdoms of Scotland and England, James’ decision to form an alliance with France resulted in the devastating Battle of Flodden, in which England emerged the winner and King James was killed.

James was born on 17 March 1473, in Stirling Castle. His father was King James III, and his mother was Margaret of Denmark. James III was unpopular among his peers, and his politics escalated tensions among Scotland and England patricians. He was also estranged from his own family members. The rebels were so disgusted that in one of the many rebellions that they organized, they projected a 15-year-old James as their leader. Subsequently, James III was killed in the ensuing battle, and young James became the King of Scotland. Due to his indirect involvement in his father’s death, James was guilt-ridden, and every Lent wore an iron chain cilice around his waist as an act of penitence.

James was a wise ruler, and unlike his father, he was popular among his peers. He improved the relations between Scotland and England, recognizing that peace between both the superpowers was pertinent on a global scale. Although briefly, he did invade England after getting tricked by the wiles of the pretender to the English throne, Perkin Warbeck. James was an able administrator who revamped the law and order system. The number of sporadic insurrections considerably diminished when he was on the throne.

In 1502, he sought to end the more than two hundred years of warfare and skirmishes by signing the Treaty of Perpetual Peace with Henry VII. Next year he married Henry’s daughter Margaret Tudor. Even after the Treaty was signed, the enmity between the two kingdoms didn’t fully wear off, ultimately ending with Union of the Crowns at the turn of the next century.

James was a connoisseur of fine arts and was also interested in the progress of science. He set up many institutions and colleges and contributed immensely to medicine and surgery, the two fields he was particularly interested in. His court boasted of poets like William Dunbar and Gavin Douglas. James was eloquent in multiple languages and is believed to have conducted language deprivation experiments also.

Henry VIII became the King of England in 1509, and everything changed after that. James had formed an alliance with Louis XII of France, and when Henry waged war against the French, James’ old enemy was back into the scene again. James had upgraded his naval forces to a large extent, boasting the largest ship in the world at that time, Great Michael. The Royal Scottish Navy was sent to aid the French in the Renaissance Wars. Despite Pope Leo X’s threats, on September 9, 1513, James led his troops against the English forces led by the Earl of Surrey, Thomas Howard. The Battle of Flodden, which was fought in the county of Northumberland, resulted in a heavy defeat for the Scots and King James IV was killed. On 21st October, 17 month-old James V was crowned the King of Scotland.

King James IV married Margaret Tudor, the daughter of Henry VII and sister of Henry VIII of England. The marriage was a direct consequence of the Treaty of Perpetual Peace. They had four children. James also had several illegitimate children from a plethora of illicit affairs with various mistresses and concubines.