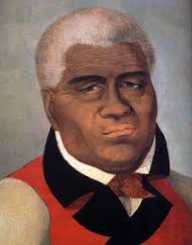 Kamehameha is revered as the first chief to conquer all the Hawaii Islands and establish a lasting monarch.

He was born in the year 1758 in Kohala, part of Hawaii Islands. At birth, he was named Paiea which means The Hard Shelled Crab. He was of high noble parentage. His father was a revered chief, while his mother was the daughter of the Hawaiian King Alapai.

Hawaiian legend has it that before Kamehameha was born, a bright comet passed over the skies of the islands. The spiritual priests interpreted that to be the fulfillment of prophecy. A long-standing prophecy held that a bright star would fly past the skies like a bird before a great ruler is born. Fearing for his throne, King Alapai ordered for the murder of his daughter’s child. When Kamehameha was born, his mother organized for his escape. Kamehameha was brought up by his uncle Kalaniopuu in secrecy.

When he became of age, he was welcomed back to King Alapai’s court. Paiea dropped his original name and assumed the name Kamehameha, which means One Set Apart. He continued with his education as a royal warrior. His physical strength and military skills were admired by friends and foes alike.

As tradition dictated, the king married several wives and had a big family. To consolidate his power on the Hawaii Island, he befriended European personalities. He used his friends to acquire guns and other war ammunition.

When he was certain of his power as king, he embarked on the tough conquest wars. He enlisted two English sailors John Young and Isaac Davis to his royal court. In 1795 Kamehameha first attacked the three islands of Maui, Molokai and eventually Lanai. His superior European ammunition helped him to easily conquer the islands. He then invaded the island of Oahu. Kamehameha took little time to pacify and take control of the Island.

While he was out in the battlefield, one of the chiefs on the Hawaiian Island led a rebellion against King Kamehameha. The king returned and engaged Chief Keuoa. During the battle in Hawaii, a volcanic eruption occurred. The dissenting warriors were buried in the lava. Most people on the island saw this as the hand of the volcano deity favoring the king over Chief Keuoa. Chief Keuoa was defeated. By the fall of 1795, King Kamehameha had control of all the Hawaiian Islands save for Kauai and Niihau. The two islands joined Kamehameha’s kingdom following a treaty in 1810.

The king formed a unitary system of government. He had royal advisors, regional administrators who directly reported to the throne. His system proved successful as it included representatives from all over the islands.

On the issue of food sufficiency, the king encouraged his subjects to boost farming. He emphasized on the farmer to cultivate traditional food, promoted the preservation of dry food for future use. The kingdom soon became food sufficient.

King Kamehameha encouraged trade with the westerners. He opened trade with the European merchant ships visiting the islands. Though he was a progressive king, he managed to create a tight customs system. The king controlled what and how the business was done on the islands. This helped him curtail the western influence from destroying the traditional ways of the natives.

During his reign, he initiated a series of laws that served as the new constitution. Though he maintained much of the traditional customs, the king outlawed the sacrificing of humans in the kingdom. To safeguard individual human rights, he established laws that governed the daily lives of his subjects.

King Kamehameha 1 had numerous wives as per the tradition of his days. He outlived most of his wives and children in his lifetime. Four of his descendants succeeded him under the titles Kamehameha II, III, IV, and V.

On June 11, 1819, King Kamehameha 1 died in Hawaii. His two close aides buried him in a secret location. To date, the burial site remains a mystery.

His presence can be found all over Hawaii today. Statues have been strategically erected in several islands. Learning institutions on the islands bear his name.